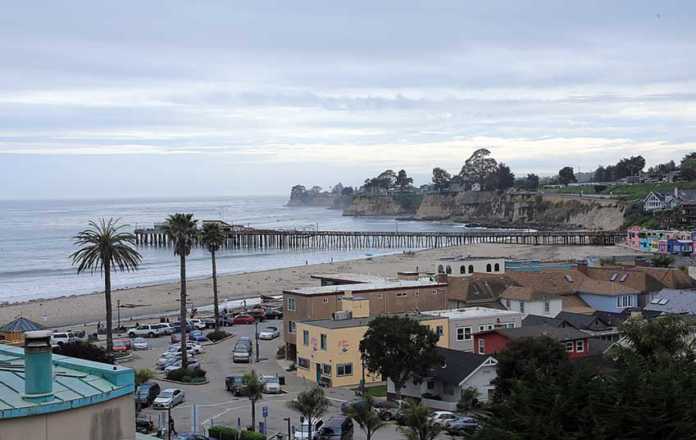 CAPITOLA — As schools take turn releasing their students into the world for spring break, many businesses in the Capitola Village are hoping this will bring the reprieve they need to keep their doors open.

The unusually wet winter, complete with multiple road closures, has hampered businesses whose main source of revenue comes from tourists.

“It was very slow,” Rainbow City Limit shop owner Babette Arrowsmith Fenton said. “A slower than usual winter — we don’t get many visitors when we have weather like that. We haven’t had that kind of rain in 20 years.”

Sitting below sea level, businesses in the Capitola Village are the focus for the Public Works Department throughout the winter season, according to Toni Castro of the Capitola/Soquel Chamber of Commerce.

“Their priority has been the Village to make sure things stay safe and clean,” she said. “[The Village] is always affected by waves and flooding — they get the brunt of it and it does affect people not going down there.”

In 2011, an overwhelmed drainpipe that had collapsed resulted in massive damages and flash flooding for several businesses. But while there was no major flooding this year, retail shop owner Devon Salter, whose store Capitola Reef specializes in toe rings and beach attire, said the continuous rain posed a different kind of problem for those who carry seasonal products.

“The biggest challenge during the winter would just be lack of business, which is a direct result of the weather,” he said. “Now our challenge, for those in retail, is a lot of us brought in winter product and now we don’t have funds for spring product.”

Until the businesses can raise enough money, they are unable to have their summer inventory shipped.

“Talking to the other shop owners, this has been their toughest winter,” Salter said. “Some of them that they have ever had, and they have been here 25 years-plus.”

Part of this is a lack of a local base in their consumers, Salter said. Citing parking and early closing hours during the week as one of the reasons many stay away, Salter said road closures and commute times also had an impact.

“There’s so many variables, most locals don’t want to venture down here, they want to have their cars if they are shopping,” he said. “It just rained so much. Almost every day in February, 70 percent of the days in January … [Highway] 17 being closed, the last thing they want is to come down into the Village and shop when they are having an eight-hour commute.”

Tourists, he said, became skittish after the mudslides, fearing being trapped. For the Village, inclement weather spells retail gloom.

“We are wimpy when it comes to the rain — we aren’t used to it, but we could be like Chicago,” Fenton said. “You gotta get out and live your life, but people are funny.”

But the seasons have turned, and owners are optimistic about the future.

“People will come,” she said. “It always works out.”

And for Salter, he said he wants the locals to know that they are wanted and valued.

“We love having the locals here; a lot of the shops here offer incentives and discounts to people who live here,” Salter said, adding that it is nice to converse with those that live in your own community. “I do get a lot of locals for my toe rings, but I think it makes for a better environment to have locals and tourists mingling.”

In an effort to reach out to the locals, some shop owners are banding together to offer “sunset shopping.” Now, on Fridays, some shops throughout the Village will keep their doors open longer. Hours have been extended to 8 p.m. in order to accommodate those with nine-to-five jobs.

“I personally love having locals in my shop,” Salter said.