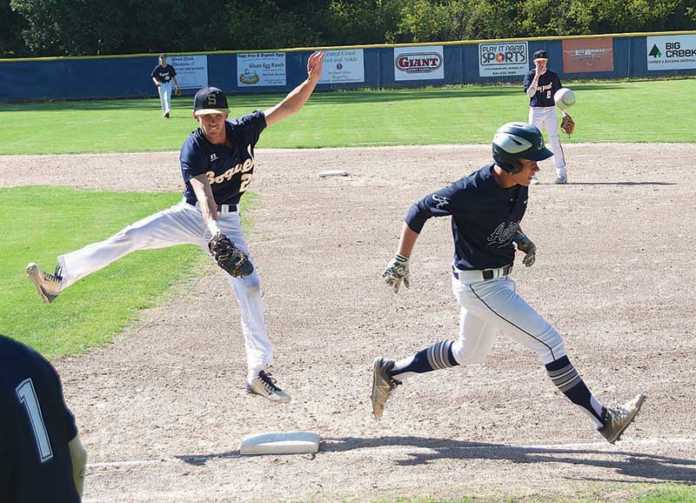 For the Soquel High Knights, it wasn’t over until the seventh inning, when they rallied to beat the Aptos High Mariners 4-3 on April 21 and confirm their spot on top of the Santa Cruz Coast Athletic League.

With a share of first place on the line, Soquel received a gutsy pitching performance from junior Nate Werdmuller, who settled in after giving up two runs in the first inning to go the distance for the win.

Aptos contended with a significant distraction: prom night, which deprived it of several of its key players, including senior Jake Keaschall.

While they were away, the rest of the team looked set to come out with a victory until the top of the seventh inning.

Senior Joe Fugate relieved starter Joseph Navarrette at the top of the seventh and loaded the bases following two perfectly placed bunts by Soquel sophomore Josiah Granados and Werdmuller and a walk to junior Ryan Murtha. With the bases loaded, junior Forrest Hays, who replaced Fugate, tried to stem the tide but hit Soquel junior Nolan Moss with a pitch to drive in the tying run and walked junior Leo Ramirez for the go-ahead run.

“It was a good game; it was fun,” said Soquel head coach Robert Zuniga. “We knew it was going to be like that. Characteristic of this team to go all the way to the wire. They always hang in there until the end.”

While the remaining Mariners got dirty on the diamond, a few were absent, attending to the social highlight of the high school year.

“We lost five guys today. He (Keaschall) is one of the best players in the league, and it hurts not having him,” said Mariners head coach Jason Biancardi. “The other guys stepped up and we had a chance to win today. It’s hard to hang our heads and Navarrette gave us a chance to win today. We played good baseball. I’m not disappointed but it would have been nice to get a win.”

Navarrette was dealing through six, throwing what he describes a curve/slider that comes out of the hand like a palm ball. Changing his arm delivery from an over the top delivery to a sidearm, Navarrette held the Knights to one run on six hits.

But the ace of the game was Werdmuller, who gave up three runs on 10 hits while walking two batters and striking our four.

“He was nails for us today,” Zuniga said. “He went into the 90-pitch range and became a bulldog. That’s a lot of pitches, but he said ‘let me keep going,’ so I did and he ended up doing the job.”

A Mariners’ rally came up short in the bottom of the seventh. With one out senior Anthony Bella was picked off at first by Werdmuller. Werdmuller proceeded to hit Timmy Harris with a pitch and junior David Reckers collected a sharp infield hit to narrow the score to 4-3 before Werdmuller got the third out to win the game.

“In that first inning I got a little nervous, but I had the confidence to know that my defense would help me out,” Werdmuller said. “At the end I knew just needed to keep throwing strikes.”

For Aptos, Bella collected three hits and drove in two runs, while Hays finished with four hits in as many at-bats. For Hays, though, after being on the mound in the seventh inning, the loss was disappointing.

“It was brutal after coming in, in the seventh, but we came back and battled hard and we got a few hits and got the bases loaded at the end,” Hays said. “What more could you ask for? It was a good game.”

Despite the game being tight and competitive, the problem with the prom was a concern for Aptos.

“Coming in we didn’t know who was going to play what position,” Hays said. “There was a lot of confusion about what was going on with prom, but we decided there wasn’t anything we could do, so we just went with what we got. We played and we played hard. It was tough missing a few guys.”