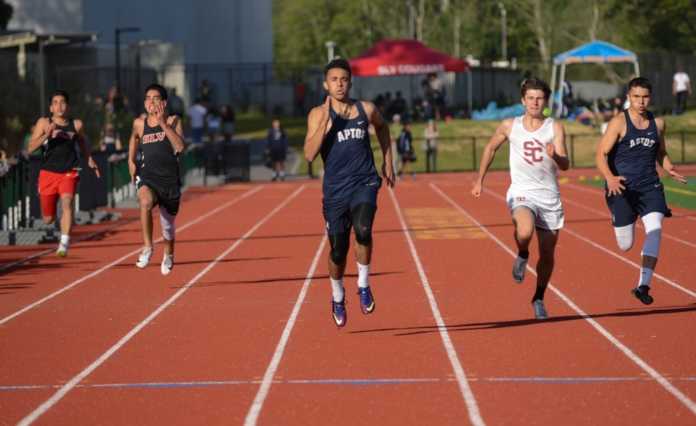 To say Aptos High senior Hunter Matys was on top of his game at the Santa Cruz Coast Athletic League boys track and field championships would probably a real understatement.

The kid was just absolutely in the zone and nobody was getting in his way.

Matys won all four of his events at the league finals at Harbor High. And not only did he win, but he set school records in three out of four — 200-meter, 4×100-meter relay and long jump.

“It means a lot, doing it at league finals where it matters,” said Matys about setting the school records. “Anything that goes wrong could be detrimental and take you out from CCS.”

Matys’ big-time performance also helped the Mariners win their third straight SCCAL boys track and field championship. It also means another trip to the Central Coast Section trials for him.

Matys was the “closer” as he sprinted towards the finish line for the win.

Matys said this year’s win meant a lot because they’ll get to redeem themselves at CCS after what he called a disaster.

“We dropped the baton and it wasn’t good,” he said.

Matys said this year’s relay team kept aiming to break the 4×100 school record because no other team has gotten this close.

“We still always knew that we can keep going,” Matys said.

The all-star track athlete said the team was having trouble with handoffs the past couple of weeks. Matys said the win was similar to last year’s league title run when they lost to Santa Cruz after fumbling around the baton in the regular season, but beat them in the end at the league finals.

They did it again by beating out the Cardinals’ foursome of sophomore Alex Rosas, senior Travis Hatcher, senior Jack Courtright and senior Rory Hatcher, which finished in 44.97.

Those who finished in the top two qualified for a chance to compete in the CCS trials, which is on May 11 at Gilroy High.

Matys was stellar in the 200-meter dash by winning in 20 seconds flat, which was also a school record. He finished ahead of Santa Cruz’s Rory Hatcher (22.21) and Aptos’ Anthony Cardenas-Ramos, who finished third (22.53).

“I’ve just been working it out all year and working with both of my coaches,” Matys said. “We always knew we had it in the tank but it hadn’t happened until today.”

Matys said he felt good coming down the runway after the 4×100, which was his first event, and was confident as he was gearing up for the long jump.

“I put on my spikes and I told my teammates, ‘I’m feeling good today,’” he said. “I jumped 23 feet three times today and I hadn’t jumped it all before, so I’m just really proud of that.”

Matys couldn’t decide which school record meant more to him but said just having a record in general is special.

Matys also received the Enzweiler award, which is given to the athlete who scores the most points, 40, for his team at the SCCAL track and field championships.

The Mariners had strong performances from other athletes, including junior Xarius Joseph after he won the 110 meter hurdles (15.63) and triple jump (41-07).

Aptos senior Eli Galster and sophomore Gabe Maloon took both of the top two spots in the pole vault, which was already decided on Wednesday at Harbor High.

The Mariners girls’ team finished as the runner-up with 137.5 points behind San Lorenzo Valley (169), which won its first SCCAL title in 39 years, and in front of Soquel, which placed third (72.5).

The warm temperatures might have played a big factor for some athletes on Friday. Aptos junior Brynn Mitchell said she was feeling a bit weak and nervous going into the league finals.

“But it all kind of went away once I started running,” she said.

Mitchell placed second in the 100 high hurdles, which is the third time she’s qualified for a spot in the event at the CCS trials. Aptos senior Indra Lyons, ranked No. 6 in CCS, won the event in 15.35 seconds.

“This is my main event,” she said. “This is the one that I love the most. I’m really hoping to do well at CCS and hopefully get the school record.”

Mitchell said she’s eight hundredth of a second off the school record and that’s what the goal is at Gilroy High. She said this time is different because she already knows what to expect on the big stage.

“The first two (years), I was still new but this time I think I have a good chance at the (CCS) finals and state,” Mitchell said. “I’m really excited.”

Mitchell, who earned the the Bob Enzweiler Award on the girls side, won the long jump (17-06.00) and triple jump (34.05). She’ll be one of five girls on the Mariners competing at the CCS trials.

Aptos junior Sydney Ghiglione won an individual title in the discus (99-08), while seniors Haley Veldhuis and Peyton Masuen along with freshman Malia Kessler each took second in the 200, the shot put and the triple jump, respectively.