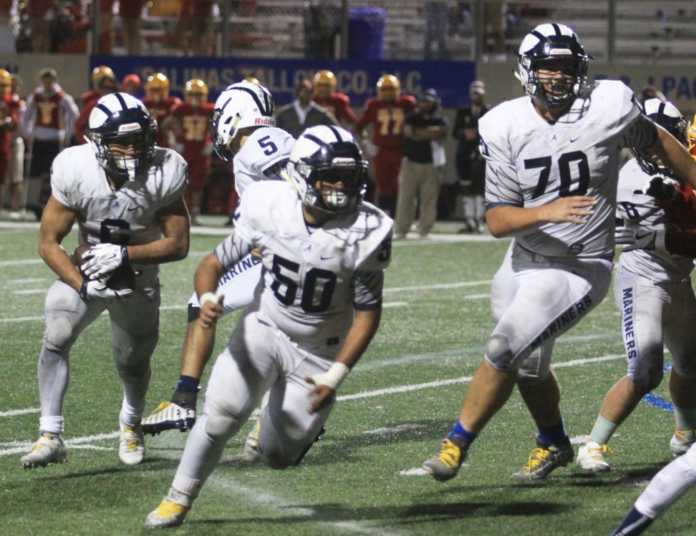 1. Alex Austen, senior, Aptos: At 6-foot-5 and 311 pounds, Austen wowed with his athleticism on the football field and in the throwing circle. During the fall, Austen helped the Aptos football team finish second in the Monterey Bay League Gabilan division by clearing the way in the trenches. He was named the league’s co-Offensive Lineman of the Year, and also earned an All-MBL-G First Team spot. In the spring, he won the Santa Cruz Coast Athletic League title in the shot put and also earned a spot in the Central Coast Section finals in the event.

2. Justin Parker, junior, St. Francis: Parker was one of few student-athletes who won a league championship in every sport he competed in. He helped the Sharks’ football team win the Mission Trail Athletic League Coastal division title in the fall, while also winning individual titles in wrestling and track in the winter and spring, respectively. Parker won an SCCAL wrestling crown at 145 pounds and sped to a victory in the 200-meters on the track.

3. Marcos Reyes, junior, Aptos: The hard-running halfback was the Mariners’ best weapon on the gridiron this season. He totaled 1,247 yards and 16 touchdowns on the ground in just nine games to help lead the Mariners to second place in the MBL-G. He was named the MBL-G co-Offensive Player of the Year and also earned a spot on the All-MBL-G First Team. In the winter, Reyes finished runner-up in the SCCAL at 160 pounds and went on to notch a 4-2 record at the CCS meet. He also ran sprints in the spring for the Mariners’ SCCAL champion track and field squad.

4. Kacey Losik, senior, Aptos: The high-flying outside hitter guided the Mariners to their third SCCAL title in the last four seasons. He also powered Aptos to the CCS Division II championship game and the NorCal D-III semifinals. A year after winning the SCCAL Offensive Player of the Year, Losik was named the league’s M.V.P. for his efforts.

5. Justin Torres, senior, Aptos: Torres was a leader on the football field and wrestling mat. The sturdy offensive lineman earned an All-MBL-G First Team selection after opening holes for the Mariners’ stable of backs in the fall, and he won an SCCAL wrestling title in the heavyweight division in the winter.

6. Josh Kovacs, senior, St. Francis: Kovacs was a standout linebacker in the fall and a solid third baseman during the spring. Kovacs was the point man for the Sharks’ stout defense, which led the football program to its first-ever league title — an MTAL-C co-championship with Santa Cruz High. He was named the league’s Defensive Player of the Year. Kovacs also hit .257 with 19 hits, 10 RBIs, four doubles and nine scored runs for the baseball team, which took second in the SCCAL and advanced to the CCS D-III championship game.

7. Jason Gallo, senior, St. Francis: Gallo completed his high school career as the most accomplished basketball player in program history. The 6-foot-5 big finished with the record for most points (1,414) and rebounds (963), while the Sharks notched their fourth straight 20-win season (20-6) and advanced to the CCS D-V semis. Gallo also ran cross country for the Sharks in the fall.

8. Garret Laine, senior, MVC: Even through tough seasons, Laine’s brilliance shone through in both the fall and spring. Despite playing safety, he led the Mustangs in total tackles (96) and solo tackles (69) while earning an All-MBL-G Second Team selection. Laine was also a star for the school’s baseball team, posting team highs in batting average (.375), hits (33), runs (22), doubles (4), triples (2) and home runs (3). He was named to the MBL-G First Team for baseball.

9. Derric Estrada-Haro, senior, St. Francis: The senior helped the football team win its first-ever league crown and led the baseball team at the plate and behind it. The team’s starting quarterback in the fall, Estrada-Haro passed for 348 yards and six scores during St. Francis’ run to a share of the MTAL-C title with Santa Cruz. In the spring, the starting catcher led the Sharks in nearly every offensive statistical category, totaling 22 hits, 20 runs, 24 RBIs, eight doubles and four homers while batting .289. He also posted a 1.02 earned run average and 29 strikeouts over 13 2/3 innings on the mound.

10. Irepan Romero, senior, Pajaro Valley: Romero was one of the bright spots for the Grizzlies throughout the 2017-18 school year. The hardworking lineman earned a spot on the All-MBL-P Second Team for both offense and defense despite Pajaro Valley’s last-place finish in the league. He also qualified for the CCS tournament in wrestling and threw the shot and discus in the winter and spring, respectively.