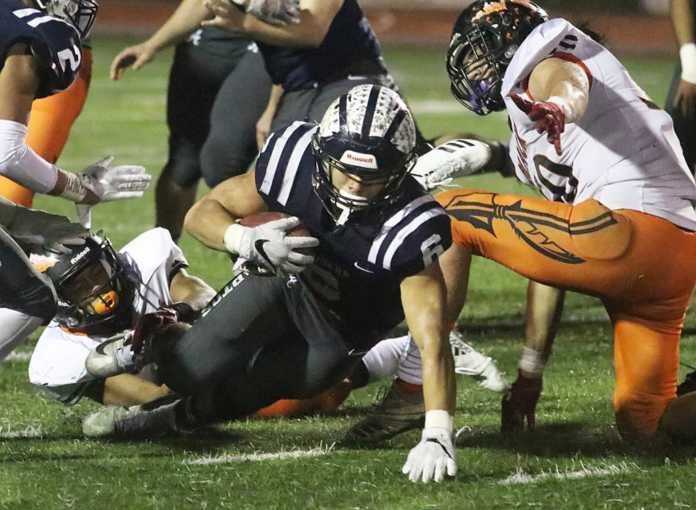 NorCal Football: Aptos overwhelmed by sizable McClymonds in 4-A final

“I didn’t think they could hit that big body that many times without hurting themselves,” Peters said.

The Aptos Mariners — battered and bruised by the end of the night — did their best Rocky Balboa impression, swinging away at the “big piece of meat” over and over again, but there was no fairy tale ending for the group of scrappy underdogs.

The postseason run of dreams came to an end in the California Interscholastic Federation NorCal 4-A championship game.

McClymonds, a juggernaut from Oakland with a handful of kids that will play on Saturdays for college programs in the near future, ended it with a 28-20 win.

“Hell of a ride, hell of a ride,” said Aptos head coach Randy Blankenship. “We didn’t finish it the way we wanted to, but we lost to a really big, physical, well-coached football team. I don’t think we left anything in our tank.”

A week removed from knocking off Central Coast Section power Sacred Heart Prep for the Open Division III title, Aptos (11-3) — the first team from Santa Cruz County to play in a NorCal bowl — had a chance to force overtime against McClymonds (11-2), a back-to-back state champion.

With the help of a pair of penalties, the Mariners moved down to the Warriors’ 26-yard line, but the possible game-tying drive came to a screeching halt, and so too did a season full of record-breaking performances.

Reyes said he has plans to play in college, but has yet to make a decision on what path to take. Blankenship, who has had dozens of college football players and a few pros over his 40-plus years on the sideline, called Reyes one of the best he’s ever coached.

“Who ever gets him, they’re going to get a diamond,” Blankenship said. “A finely cut diamond. What he has in here,” the coach said pointing to his chest, “is unreal.”

Peters, whose son, Marcus, plays cornerback for the Los Angeles Rams, said he was thoroughly impressed with Reyes, and would work the phones to get a him a few looks from college coaches.

“He’s a tough kid,” Peters said of Reyes. “He deserves a shot somewhere.”

Julien, who is mulling over a few NCAA Division I opportunities, finished with 199 yards rushing and three touchdowns on 22 carries. His final touchdown of the night, a beastly 30-yard romp through a handful of Aptos defenders with 6:23 left, gave McClymonds enough breathing room to hang on.

The Warriors’ duo turned several defenders into crash dummies, drawing “oohs” from the standing-room-only crowd of more than 2,000 upon impact.

They forced a few Aptos players to exit the game. One of the biggest losses: junior linebacker Dre Gomez, who checked out with an eye injury during the third quarter and did not return.

“It hurt,” Reyes said of Gomez’s absence. “That’s an all-league linebacker right there.”

Reyes had rushing scores of 1, 3 and 11 yards on the night. His first two touchdowns put the Mariners up 14-0, but the Warriors put points up just 22 seconds later on Julien’s 19-yard touchdown run, which was set up by Daveonne Sanders’ 67-yard kick off return.

Aptos went into the half up 14-7, but its record-setting offense went cold in the third quarter and McClymonds made enough plays to push its winning streak to 10 games and return to a state championship.

“We had to adjust — we were rusty,” Julien said. “At the end of the day, we got together and handled our business.”

Aptos rushed for 147 yards in the first half. A big chunk came on senior Silvano Lopez’s 70-yard sprint, which set up Reyes’ second score.

The Mariners had just 71 yards rushing over the last two quarters, as McClymonds senior linebacking trio of Islee Cassidy (6-foot-2, 225 pounds), Monte Smith (6-1, 215) and Javanz Dornners (6-2, 220) plugged most of the running lanes.

“They were just everywhere,” Reyes said. “Everywhere I looked, I saw white and orange.”

Reyes is one of 17 seniors who helped lead the program to its fourth CCS title this decade and first since 2015, a feat that many thought was a pipe dream after Aptos lost back-to-back games against Palma and Salinas to finish tied for third in the Pacific Coast Athletic League Gabilan division.

“I’m really proud of these kids,” Blankenship said. “They just kept doing everything I asked them to do. I kept asking them to fight when those guys were rolling down hill like a big snowball. Couldn’t have asked anything more from them.”