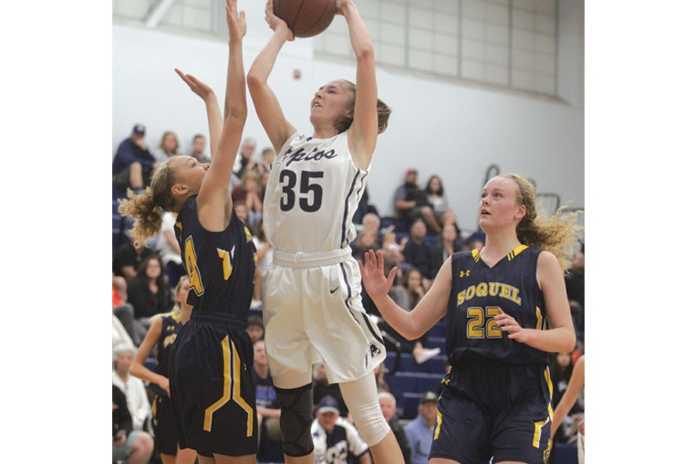 That didn’t matter either.

Soquel kept it close, but Aptos, again, would not be denied.

The Mariners were pumping their fists, dishing out hugs and taking photos with their outright Santa Cruz Coast Athletic League championship banner after downing Soquel, 63-54, in the league tournament final on Feb. 17.

The Mariners (23-3) had already locked up their first regular season title since 1982-83 just weeks before by beating the Knights (14-11) for the third time this season, but the fourth win against their rivals clinched the program’s first outright league crown in 36 years.

The Mariners did not want a repeat of last year’s gloomy tournament final loss.

“We haven’t had a championship in so long,” said Aptos junior guard Hannah Hocom. “Last year, when we lost that championship game, everyone was heartbroken. We did not want to have that same feeling again.”

Giuffre’s pull-up jumper with a little more than three minutes remaining gave Aptos a 15-point lead, but the star guard joined Ackerman on the bench on the next possession after picking up her fifth and final foul.

Two late 3-pointers from senior guard Sophie Hannah and junior wing Nevaeh Guido gave the Mariners a late scare, but they sharpened up during the closing stretch and secured the historic victory.

“They had a huge will — they wanted it bad,” Giuffre said. “If you want it that bad you’re going to fight for it. That was probably the hardest part of tonight. They played really hard.”

The Knights’ will started from the inside and slowly made its way to the perimeter as the game went on.

Finch and Duran had their way with the Mariners defense in the post. The two combined to score 24 points, and helped the

Knights get off to a strong start in the first quarter.

Aptos finally found its rhythm after the intermission. Emma Stefanini’s 3-pointer jump-started the Mariners’ 9-2 run in the closing moments of the third.

They led 44-31 heading into the final stanza, and kept the Knights at arm’s length the rest of the way.

Even with two starters watching the final three minutes from the bench, Aptos kept its cool.

“They didn’t panic, and that’s good for what’s up next,” said Aptos head coach Stefan Hocom.

Aptos got a chance to defend its Central Coast Section Division III crown over the next two weeks.

The Mariners were handed the No. 2 seed in the bracket, and were off until the quarterfinal round of the tournament at Aptos. They also hosted the semifinal round. The results were unknown as of press time.

There were rumors Aptos could possibly move up to the prestigious Open Division, but that was not the case when the

league reps met for the section’s seeding meeting on Feb. 18.

Coach Hocom said his girls were all for the challenge of possibly playing the top team in the country, Archbishop Mitty, after Feb. 17’s win.

Instead, they got the week off and awaited their next opponent.

“We want to go open,” coach Hocom said, “but wherever we land we’ll be competitive.”