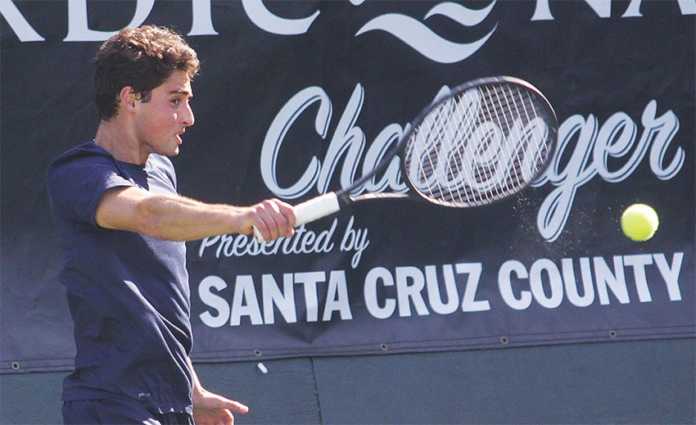 The Aptos High Mariners have been the cream of the crop in the Santa Cruz Coast Athletic League all season long.

Senior Kourosh Safari repeated as the SCCAL singles champ with a grueling 6-3, 2-6, 6-2 win over Santa Cruz High’s Jack Tierney, while the Mariners’ duo of Carter Bond and Jake Kluger breezed through Soquel High’s pair of Lincoln Cooley and Casey Valcarcel, 6-1, 6-3, for the doubles title at the Seascape Sports Club.

The two victories capped the Mariners’ dominant run through the SCCAL this season. Aptos defended its team title with a perfect 10-0 record in league matches a year after finishing 9-1.

“It’s two great seasons in a row and we just kind of keep building on that,” said Kluger, a junior who switched around with Bond at No. 3 and 4 singles throughout the SCCAL season.

Kluger and Bond weren’t pushed much in their 40-minute match, as the latter captured a doubles crown for the third straight season — he won the last two with now-alumnus Jackson Ward.

The twosome changed into sweats and hoodies, received its championship medal and was long gone before Safari scored the winning point in what turned out to be one of the best matches of the year.

The defending champ controlled the final set from start to finish to hold off Tierney for the second straight season.

Last season, Safari cruised to his first title in 6-0, 7-5 fashion. This time around — with some history and a friendship on the mind — was different.

“I met Jack last year. I didn’t know him. We’re friends now,” Safari said. “It’s a bit different. This is my friend, but I have to beat him. It’s a bit more mixed emotions. I feel kind of bad for him.”

Those “mixed emotions” were unnoticeable when the racquets were swinging. Both players were merciless throughout, and hitting several winners that left the other shaking their head.

In the end, Safari, with his deadly slicing backhand, proved too much for the upstart sophomore.

“I feel like mentally I’ve gotten a lot better in the last two or three weeks,” Safari said.

Safari, Kluger and Bond will advance to the Central Coast Section individual championship at Imperial Tennis Courts in Aptos on May 15.

A year after advancing out of the first round, Safari said he has high hopes for his final go-around.

“I want to go as far as I can — ideally, I win it,” Safari said. “We’ll just see what happens…I feel like I’ve got decent chances there.”

The way Kluger and Bond see it, everything from here on is icing on what has been an incredibly satisfying cake.

The two will return to their singles slots in next week’s CCS team tournament, which starts on May 2. The Mariners, who were 13-2, will find out their opponent and where they play at April 30’s seeding meeting.

Aptos last year fell 7-0 to Carlmont High in the first round.

“Hopefully we pickup a couple of matches, maybe even win one,” Bond said. “It’s definitely a step up, going over the hill.”

Bond and Kluger were taking their championship photos as Safari and Tierney moved into the third set.

Fresh off an error-filled second set, Safari corrected his mistakes from the get-go in the third. With the title on the line, he jumped out to a 3-0 lead before Tierney battled back to make it 3-2.

Safari, however, refocused and forced Tierney into costly errors down the stretch. The latter chucked his racquet into the air in frustration after Safari repeated. The two met at center court in a friendly embrace after.

“I talked to him earlier a couple of weeks ago and I said, ‘dude, I’m not guaranteed to win this and neither are you,’” Safari said. “‘For league, I want to win, but if I don’t win, I want you to win.’ We meet in the finals. It’s kinda finicky. It’s like, ‘how do I deal with those emotions?’”