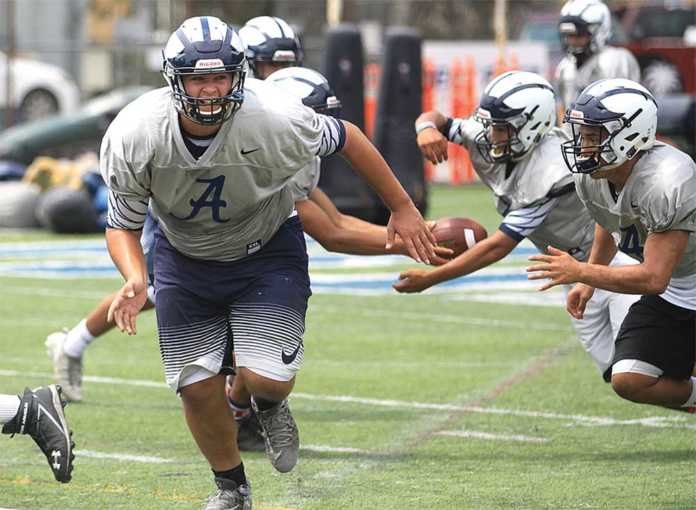 APTOS — The word gigantic, as defined by Merriam-Webster, means exceeding the usual or expected (as in size, force or prominence). The word doesn’t quite do Alex Austen justice.

“Ginormous is more like it,” said Aptos senior center Justin Torres. “You see him and it’s like, ‘holy cow.’ People shouldn’t be that big.”

Austen, a senior offensive lineman for the Aptos High football team, stands at a towering 6-foot-5-inches and 311 pounds. Standing next to his fellow lineman, the starting left tackle makes them all look like members of the freshman squad. Six-foot-2, 283-pound senior tackle Joseph Gutierrez-Lee might as well be 5-foot-7 and 150 pounds.

Austen and his family are still a bit puzzled as to where his size comes from. His father, Thomas, is 6-foot-1 and his mother, Jasmine, measures in at 5-foot-6. Oh, and Austen has a twin sister, Ana, who is a whole foot shorter than him.

“It makes no sense,” said Aptos senior cornerback Blake Wheeler. “You see her and then you see him. It’s like, ‘how the heck?’ All I know is I’m glad he’s on our team.”

Austen has poured over pages and pages of articles on the internet, read several books and watched a handful of videos on the normal height of humans — about 5-foot-10-inches, he said — and what leads to variations. It’s not a normal summer pastime for a high school senior but Austen is anything but normal.

“I thought it was interesting and a bit weird,” said Austen, who explained that his hours of research led him to believe height is a mix of genetics, nutrition and chance. “I’m thinking, at this point, it’s just because I eat a ton.”

Austen did plenty of that over the summer — many burgers met their sad fate in that time — but he somehow got leaner, stronger and quicker. Overall, he gained 50 pounds while also growing an inch taller.

“I feel faster than last year,” Austen said. “I don’t know how.”

And it’s not just a feeling. Austen’s athleticism is what makes him special. An immovable object in pass protection and an unstoppable force while run blocking, Austen is as flexible as a ballerina in the middle of a hot yoga session and moves his feet quicker than a hungry mouse chasing cheese.

“You don’t see big guys like that, that can move around and are flexible like he is,” said Aptos senior linebacker Marcos Reyes. “He might be our fastest lineman and that’s crazy.”

Blankenship said Austen has been recorded at 18 percent body fat and is also one of the strongest kids to ever pass through the program.

“There’s kids that are 310 pounds and are sloppy,” Blankenship said. “He’s not sloppy. He has the hips and feet of a 170-pounder and he has the body of a man but he’s only a young man. That’s why he’s going to be a big haul for whoever lands him.”

Yet Austen, who said he has plans of pursuing a degree in engineering, has not yet been contacted by any college football programs as of early August.

It’s not unusual for talent from Santa Cruz County to go unnoticed and overlooked. Both Ty Sambrailo and Andy Levitre were only considered two-star recruits coming out of high school. Sambrailo, a tackle for the Denver Broncos, received just one scholarship offer from Colorado State after starring at St. Francis High in Watsonville. Levitre, who plays guard for the NFC champion Atlanta Falcons, garnered college offers from Oregon State,  L.S.U., Fresno State and Arizona because of his upside and his family’s roots in the NFL — his older brother, Erick, played college football at Arizona and also spent four seasons in the pros.

This summer, Fresno State and Cal Poly were the only schools to visit Aptos.

Blankenship, who has rarely contacted Division I programs for kids in the past, said he couldn’t help but to reach out and make a case for Austen. He made calls to Stanford and Cal and even dialed up national power Alabama, a 16-time national champion which also played for the title last year.

“I’ve never called Alabama before but this kid is something special,” said Blankenship, who has had several former players compete at the NCAA level, most notably former NFL QB Billy Volek. “He can play at any program for any coach. He’s big, he’s fast and he’s smart. The only problem is he doesn’t have five stars next to his name…The whole recruiting process is political. The first thing they say is who’s recruiting him? It baffles me that he has gotten no looks.”

Austen will be hard to miss this season.