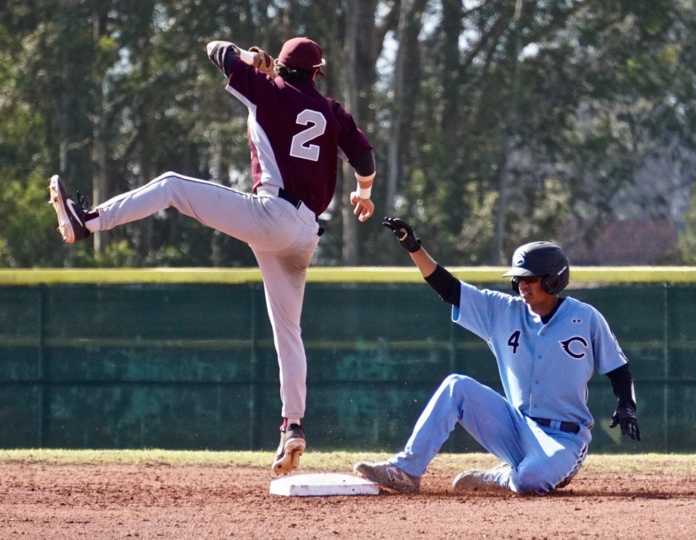 JC Baseball: Seahawks put it all together in win over Lobos

The Seahawks put all the ingredients together and dominated Thursday’s contest against the Monterey Peninsula College Lobos at the Hawks’ Nest, 4-1.

It was Bessio’s (7-2) most dominant start of the year and firmly cemented the freshman’s status as the ace of the rotation.

“The coaches do a great job preparing us,” Bessio said. “I know I have a great defense behind me. So all I know is I just got to pitch with good height in the zone and they will make the plays for me.”

Watsonville High alumnus Rex Gomez drove in the go-ahead run in the eighth inning on a smashed sacrifice fly to deep left field with the bases load to drive in Jake Keaschall.

Swinging a hot bat, Gomez had already blistered a double into the centerfield gap in an earlier inning.

It was a familiar sequence for the Seahawks with an unfamiliar outcome.

“We have struggled with that, trying to hit a two-run double (with the bases loaded) instead of the sac fly. I was trying to not do too much,” Gomez said. “We are focusing on doing what the team needs, and not just thinking of yourself.”

With 15 games left in the regular season, the Seahawks appear to be zeroing in on the numbers that really matter.

“I don’t care about stats as long as we get the ‘W,’” Bessio said. “Half our hitters don’t even know how many hits they have. They don’t care. Our goal is to win and go deep in the playoffs.”

The Seahawks will travel to Monterey to play the rubber game Saturday against the Lobos (12-12, 3-5). First pitch is scheduled for 1 p.m.