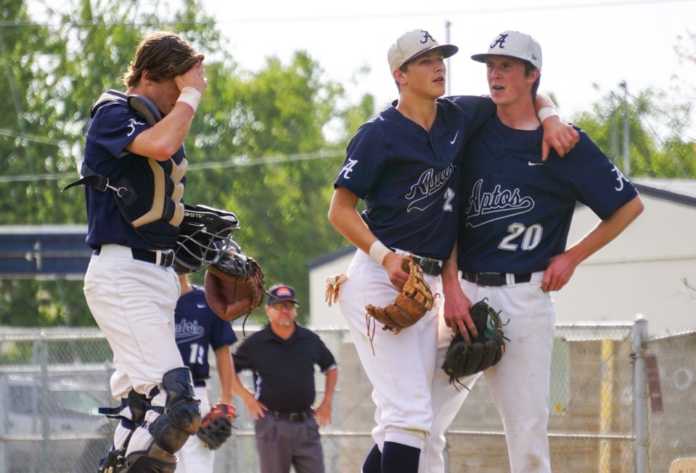 “Just to get a couple of guys recognized on first team is pretty cool,” said Aptos coach Jason Biancardi. “To get four is pretty special, especially having two pitchers both be on the first team.”

Eichhorn finished the season with a 5-1 record in 10 appearances — eight starts — on the mound with a 0.93 ERA and 55 strikeouts.

Eichhorn showed up to the team last year as a transfer and Biancardi said he didn’t have quite the season he was hoping for.

Eichhorn couldn’t play until April 2 because of eligibility rules and Biancardi said it was too late for his ace pitcher to get into a rhythm.

Going into this season, the fourth-year head coach said he wasn’t sure what to expect from Eichhorn.

“We’ve heard a lot about David Eichhorn and he comes from a famous bloodline,” Biancardi said.

“The pitchers were both very deserving,” Biancardi said. “They had really stand out numbers the whole year.”

“They take it serious and they’re baseball players,” Biancardi said.

Biancardi commended both of his juniors for their work ethic, especially during the offseason.

“They got a lot of experience as sophomores, so they came in this year with a lot of confidence that they contribute for our team and they had a very good year,” Biancardi said.

Keaschall, who made last year’s all-league second team, also had an amazing on base percentage of .495 and a .651 slugging percentage.

“I was pretty excited and honored. It’s kind of a big deal. I was happy that I had a good season and other people noticed, too,” Keaschall said.

Keachall said he was proud to see his production increase, especially in the RBI category where he went from less than 10 a year ago up to 30.

Keaschall also broke the school record for stolen bases with 25, which was one more than the previous record set by his brother, Jake.

Jake Keaschall was in the dugout when his younger brother broke his record during a league game against Santa Cruz High. Luke’s good friend, Brady Chavez, also happened to be pitching for the Cardinals.

“I took off for third and beat it by a hair,” said Luke Keaschall. “I got back up and looked at my brother, he was just shaking his head.”

The Mariners (21-7-1), who were the SCCAL runner-up and CCS D-II semifinalists, also had senior outfielder Josh Barry named to the second team.

Keaschall said he knew the team had a lot of good players on the roster, including Eichhorn, who was the incoming starting ace, and Brouse, the up-and-coming sophomore.

“(Brouse) had a phenomenal season and the future is bright for him,” Keaschall said.

Santa Cruz High swept the top honors. Chavez, a junior outfielder and pitcher won Player of the Year, while senior Clayton Ray repeated as Pitcher of the Year.