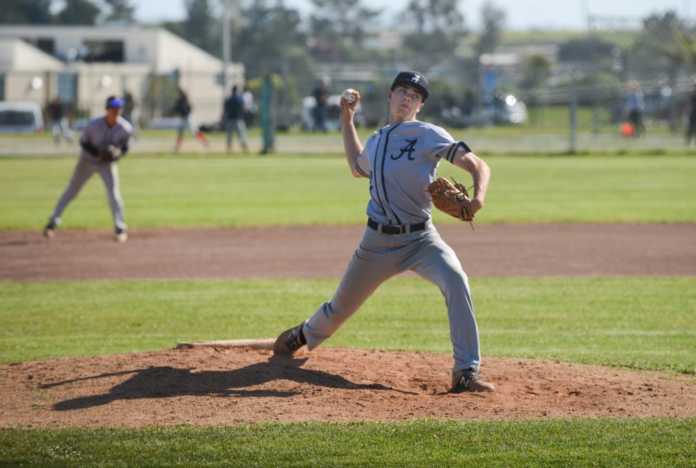 The Aptos High baseball team continues to stay on pace at making another postseason run into the Central Coast Section playoffs.

The Mariners defeated North Monterey County, 12-2, in 5 innings on Wednesday in non-league action.

Aptos sophomore Fisher Johnson made the start and threw for three innings, allowing just a run on two hits and recorded three strikeouts.

“I felt pretty good and I think the team did, also,” Johnson said. “We lost a tough one last week and I think it made us gel a little bit more together and we’re really bouncing back from that.”

Johnson was referring to a late-game loss against Scotts Valley where the Mariners gave up five runs in the seventh inning. But, they have managed to bounce back by winning four-straight games.

“We’re just playing really good baseball right now,” said Mariners coach Jason Biancardi. “As a team, everybody’s locked in and even the bench guys are coming in and hitting the ball.”

Biancardi said his ace sophomore pitcher looked sharp on the mound and Johnson has been throwing the ball hard all year, including a really good breaking ball that’s been fooling batters.

“We had a really good pitcher today and when (Johnson) throws strikes he’s really hard to beat,” Biancardi said.

Aptos improved to 17-4-1 overall and 9-3 in the Santa Cruz Coast Athletic League just behind Santa Cruz High, which sits at 18-5 overall and 12-0 in league play.

North Monterey County High (11-6-1, 7-2) came into Wednesday’s game riding a five-game winning streak and has been tested throughout the season. But, the matchup against Aptos and its ace pitcher, Johnson, was by far the biggest challenge.

“We knew that (North Monterey County) was having a good year, but the way we’ve been playing, we came in pretty confident,” Biancardi said. “And they didn’t back down. They were down quick, but they made their plays.”

However, the Mariners were making big plays of their own and had an 8-0 lead after the third inning. Aptos kept adding salt to the wound by adding three more in the top of the fourth to extend the lead to 11-1.

Rivera said the team’s pitching and defense has been their “bread and butter” throughout the season, but those two aspects of their game were nowhere to be found Wednesday.

The pitching staff, including starter Jordan Larva, struggled to get out of just about each inning, sometimes even with two outs. Plus, the defense committed four errors and allowed the Mariners to score at least a run in all five innings played.

“We got in the hole early and it’s just a little hard to come back from behind and try to chip away little by little, which we did,” Rivera said. “We just allowed them to stay back in the game and we failed to execute defensively.”

The Condors did see some offensive production in the third when Bring Gabadao reached home plate to make it 8-1. They had runners on first and second base but Johnson got out of the jam, giving up just the one run.

Condors coach Alex Rivera said he was proud of his players for making adjustments at the plate, especially against a good pitcher like Johnson.

“We know we can hit, that didn’t really surprise me,” Rivera said. “I know this is probably one of the better pitchers we’ve seen all season. He threw a little harder and made my guys stand up and fight a little bit.”

North Monterey County added another run in the bottom half of the fourth inning after Chris Villarreal recorded an RBI on a base hit that brought in Jorge Madrigal to make it 11-2.

Biancardi said the Mariners have been playing with a relaxed attitude as of lately and the defense has been stepping up.

Johnson said getting Wednesday’s non-league win was just as important as any other win and is a confidence booster as Aptos heads into the final stretch of the regular season.

“Having all of our players come up with the big at bats today is good for us because we’re a really deep team and we need that if we’re gonna make a run,” Johnson said.

Aptos begins its quest to the playoffs today with an SCCAL game against Harbor High at 4 p.m.

The Mariners wrap up the season with a two-game series against Santa Cruz beginning Tuesday, followed by the finale next week Friday. Both games also slated to start at 4 p.m.