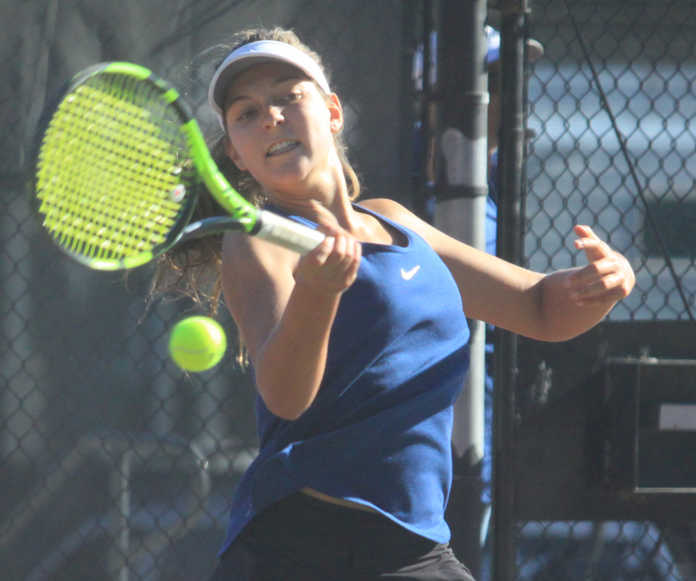 APTOS — Still undefeated and having shut out all but one team in seven league matches, the Aptos High Mariners have not just lived up to the lofty expectations set upon them at the beginning of the season, they’ve shattered them.

The reigning Santa Cruz Coast Athletic League champion, Aptos is only a couple wins away from once again capturing the league title. With all but one starter back from last year’s squad, Aptos was expected to cruise through the league. And while the Mariners are not taking any team during the final stretch of their league season for granted, they are eagerly awaiting for the real measuring stick of their skill: the Central Coast Section team playoffs.

Aptos has not won a CCS match since the Gay Finch era in the early 2000s.

The rest of the team, well…

“We got destroyed,” said Aptos senior captain Gianna Rovai with a laugh.

Added fellow senior captain Magdalena Sanchez: “The twins and Mia did amazing as always but the rest of us, we lacked a little bit.”

That defeat served as motivation throughout the summer for all 16 members of the varsity squad — Aptos also impressively has 20 players on its junior varsity team.

“I always think back to that and think, ‘I want to do better this year,’” Rovai said. “If we get that chance we have to take it and roll with it. I hope that we do a lot, lot better.”

Rovai and Sanchez, two of the Mariners’ nine seniors, have both improved their game during the summer and the results have shown in both the lopsided league scores and the play on the court. The duo is the Mariners’ go-to No. 1 doubles team and is undefeated this season.

“They’ve both made improvements individually and as a team,” said Aptos head coach Linda Hitchcock. “They’re way ahead of where they were last season.”

The experienced tandem took over the top doubles spot after the Sampson sisters moved into singles. Rebecca plays No. 2 and Lila has dominated at No. 3. The duo last year made history as the first doubles team or singles player from Santa Cruz County to make it to the semifinal round of the CCS individual tournament in at least 30 years.

Hitchcock said they’ve both made huge leaps during the summer after attending a Nike camp at UC Santa Cruz and also spending time at Tompkins Tennis in Monterey.

“They’re impressive and they’ve worked really hard to get better,” the coach said.

Like the Sampson sisters, Totah also retooled her game at Tompkins Tennis in Monterey, working on her control to limit her mistakes. One of the top freshman prospects in the state last season, Totah cruised to the SCCAL singles crown but was ousted in the first round of the CCS individual tournament. Stronger, faster and holding a better grasp of the jump in talent from league play to the section tournament, Totah said she’s hoping to put her name on the map come November.

“I would say that I’ve improved a lot,” Totah said. “I’ve really been working hard and I feel like the scores might not show it but I feel like I’m playing a lot better.”

Sophomore Molly Mott, who grew up playing tennis with Totah and the Sampson sisters at Seascape Sports Club under Brian Cory, plays No. 4 singles, while several others have seen time in doubles. Seniors Madison Glynn, Ava Totah and Kaitlin Sakae and juniors Harliegh Dooerman and Amy Buchanan, among others, have all played well for the Mariners, who want to end the CCS drought.

“That’s definitely going to measure out how this year went,” Rovai said. “We don’t want our year to end in the first round.”

Here’s a look at the rest of the teams from the area:

ST. FRANCIS HIGH
Coached by Finch, St. Francis has played tough against most of the teams in the SCCAL. The Sharks, who carry 20 players on the roster this season, have a 5-6 overall record and a 4-3 league standing.

Katherine Casper has played in the No. 1 singles spot for St. Francis, while Maya Talavera and Gabi Gutierrez have also worked into the top singles slot. Sophia Fry, Ciella Zivanovich and Emily Wells have also played singles throughout the year for Finch.

WATSONVILLE HIGH
Coached by Laura Alioto, the Wildcatz returned seven from last year’s squad and have played well against the competition in the Monterey Bay League Pacific division.

No. 1 singles player Helen Benavides, a sophomore whose sister, Sara, won the MBL title and advanced to the CCS tournament in 2013, has led the pack of youthful players through the season.

Juniors Janine Ramirez and Yvette Zamora and sophomore Maya Banuelos fill in the remaining singles spots, while junior Alondra Mora has been the veteran in doubles for sophomore Madison Ramirez and freshmen Juliana Ornelas, Isabella Lara and Emmilou Santillian.

“We have a young and up and coming team,” Alioto said. “Our doubles are our strength.”

PAJARO VALLEY HIGH
Coach Jon Tarr has been blessed with a massive 17-player team this season at Pajaro Valley. Most, however, have never played tennis before this year.

Yliana Rodriguez, Cheska Ocampo, Cindy Rincon and Xochitl Martinez lead the inexperienced team, which has slowly improved as the year has gone by.

MONTE VISTA CHRISTIAN
The Mustangs have had a tough go of things in the highly-competitive MBL-Gabilan division but have nonetheless picked up a handful of wins through the early season behind singles players Della Zhou, Sarah Kashani, Grace Sumares and Kayleigh Bajarin.