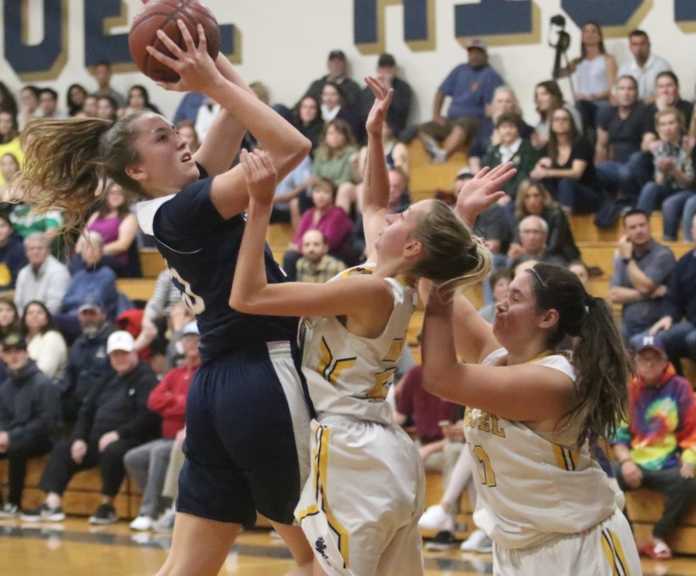 The Aptos-Soquel grudge match — losing a bit of its luster after the teams’ last six meetings — is alive and well.

McKenzie Duran-Gonzalez and the Knights gave it a giant jolt.

“It feels surreal,” Duran-Gonzalez said. “Everybody had no faith in us, but we had faith in ourselves. We brought our best game.”

And the Mariners, ranked in the top 10 in the Central Coast Section by Maxpreps.com for the majority of the season, did not.

“It was frustrating,” said Aptos junior point guard Gabby Giuffre. “Nothing was falling when we needed it.”

Duran-Gonzalez scored a game-high 20 points, two of which came on a steal and layup during the closing seconds with the win already in hand. The layup, which drew a loud cheer from the upset-hungry Soquel (14-8, 7-1) crowd, might as well have been an emphatic Zion Williamson windmill dunk.

“That felt so good — I put it in the bag,” Duran-Gonzalez said. “I didn’t want to disrespect them by pulling it out. A game is a game until the buzzer sounds.”

The Mariners said they would’ve done the same, and they’re hoping to be in the position to do so if they see the Knights in the upcoming SCCAL tournament.

The chances of that happening are good, as no other team in the league has been able to challenge either squad throughout the season. The rubber match would be the teams’ 11th meeting over the last three seasons.

Aptos had won the last six games against Soquel before Friday. The Mariners started the streak by stealing the CCS D-III title two seasons ago, and they beat the Knights four times last winter en route to a 12-0 SCCAL regular season and the league tournament crown.

Aptos this season won the first game by 12, but Friday’s loss all but ensures the teams will finish the regular season as SCCAL co-champs.

“We can’t dwell on this,” Giuffre said. “We have to know that games like this aren’t going to be handed to us.”

Aptos led 25-17 at the half, but was never able to find its offensive rhythm over the final two quarters against the long and physical Knights, who hounded the Mariners’ guards on the perimeter with athletic 5-foot-10 sophomore wing Renee Parker and clogged the lane with 5-foot-11 senior center McKenna Finch.

“We definitely played with more heart this time,” Duran-Gonzalez said. “After the last game, we said we could’ve put more into that game, and we said we have to do it the next time.”

Soquel senior wing Nevaeh Guido scored 12 of her 14 points in the fourth quarter. She hit the game-tying 3-pointer on the opening possession of the final stanza, and swished the dagger from deep with less than 40 seconds left.

Soquel outscored Aptos 22-9 in the fourth.

Going 5-of-11 at the free-throw line over the last eight minutes hamstrung the Mariners’ slim chances of a comeback.

“We played hard, we battled, and the shots just didn’t go our way,” said Aptos first-year coach Chris Grieves. “You’ve got to tip your hat to them. They played great. They beat us.”