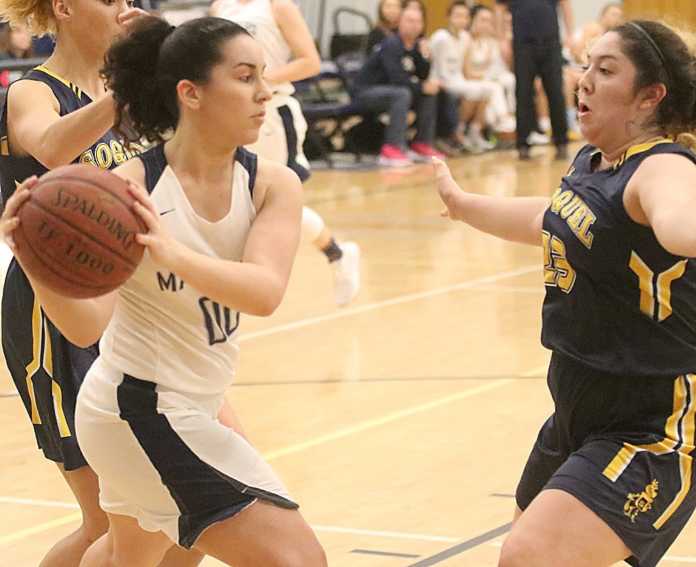 Abby Pardue has scored in double figures in only two of 18 games this season.

But the senior wing has been an invaluable piece of the Aptos Mariners’ winning formula by making the plays that do not show up in the stat sheet.

Whether it’s playing tough defense, coming up with loose balls, clogging passing lanes or chasing down long offensive boards, the 5-foot-3 “glue gal” has quietly helped Aptos to a top-10 ranking in the Central Coast Section and a 14-4 start to the season.

“When you have someone like that, who’s selfless, you have a great chance to be successful,” said Aptos first-year coach Chris Grieves.

The second-year starter is averaging just 3.7 points, 2.2 rebounds and 1.2 assists per game, but has lived up to her captain status by filling in the gaps on any given night. In a preseason win over Merced, Pardue finished with no points, but made an impact with three offensive boards, a pair of assists and three steals. She flashed her value in another preseason game against Willow Glen, too, grabbing five rebounds, dishing five assists and guarding the Rams’ top guard on a night in which she struggled with her shot and went scoreless.

“She’s a captain for a reason, and it’s not just because she’s a senior. She’s the leader of this team,” said Grieves, who described Pardue as a coach on the floor. “We’ve had a bunch of kids who have stepped up at various points and have been leaders. Even though it doesn’t always show up for her on the stat sheet, she’s been a leader for us in so many different games and in so many different situations.”

Perhaps the most important part of her success, is Pardue’s willingness to defer to her teammates. She often gives up a good shot, and tries to set up one of the team’s top three scorers, Natalia Ackerman, Gabby Giuffre or Hannah Hocom, for better looks. Her effort, selflessness and decision making will be one of the main determinants of the Mariners’ success this winter.

“I like that my teammates know that I’m always going to be there, knowing I’m always trying to help them,” Pardue said. “Knowing that I have a lot to carry on my back is fun. If there’s no pressure, and you don’t have any responsibilities, then what’s the point?”

Her offensive turnaround, too, will be a key factor for Aptos, which has hopes of winning its second CCS title in three years. Since the new year, Pardue has shot 43 percent from the field and 41 percent from beyond the arc. With so many prolific scorers around her, there won’t be many games in which she will be asked to throw up more five shots — her season average — but Pardue is ready to fill that role if need be.

“It’s not about all the points you score all the time, but I’ve been heating up a little bit — putting a little spice into our offense lately,” Pardue said. “It’s nice to be making some of my shots. I was getting a little down on myself, but once I hit one, it’s just been going up since there.”

In other girls’ basketball action from Jan. 10-16:

• Pajaro Valley 58, Santa Catalina 20 – Jayleen Solorzano had 22 points and 17 steals as the Grizzlies broke the program record for most wins in a single season on Wednesday night with a blowout Pacific Coast Athletic League Santa Lucia win.

The Grizzlies welcome in Greenfield tonight at 7 p.m.

The Sharks play at King City tonight at 7 p.m.

• At Christopher 59, NMC 44 – The Condors suffered a PCAL-Mission loss on Tuesday night.

• Alvarez 53, at Watsonville 36 – Ruby Galvan had 16 points in the Wildcatz’s PCAL-Mission loss on Tuesday night.

• Pajaro Valley 64, Monterey 43 – Solorzano had a triple-double (36 points, 11 rebounds and 10 steals) as the Grizzlies started their PCAL-Santa Lucia season with a win on Jan. 11.

Giuffre, a junior, scored a game-high 28 points, and Pardue added 14 points. Their hot shooting nights came at the right time, as the defending SCCAL champion Mariners were locked in a battle with the rival Knights through three quarters.

Aptos led 48-42 heading into the final stanza, but pulled away with a 16-4 run at the start of the fourth.

“I expected them to battle no matter how much talent we got,” said Giuffre, who celebrated her 17th birthday the day before. “They’ve got a strong team, and they’re going to drop dead before they let us blow them out.”

• St. Francis 55, Soledad 49 – Yniguez poured in 18 points, Audrey Hernandez chipped in 11 points and the Sharks edged the Aztecs in their PCAL-Cypress opener on Jan. 11.

Cortes had 10 points and seven rebounds, and Tellez also scored in double figures for M.V.C.

His former protege, Priscilla Mora, and her plucky Condors made sure of it.

N.M.C. held the Cook-led Wildcatz to only five field goals to open up PCAL-Mission play with a dominant win on Jan. 10.

“It was fun,” said Cook, now in his first season with Watsonville. “The gym looks different, but it’s the same crowd, same vibe.”

It was Cook’s first game back in the Condors’ gym since he stepped down from his post as N.M.C.’s coach following the 2015-16 season. Over nine years at N.M.C., Cook won a pair of league titles and 122 games overall while also leading the program to the Central Coast Section playoffs seven times.  He also coached Mora during her final three seasons of high school hoops, helping her earn league M.V.P. honors as a junior.

“He’s always been a big mentor for me,” said Mora, who took over as N.M.C.’s coach this winter. “Even now he’s still helping me out, even though he’s at a rival school. Even after this loss, he’s still a person I can count on.”

• Gabby Giuffre, Aptos – Scored 28 points with six 3-pointers in a win against Soquel on Jan. 11.