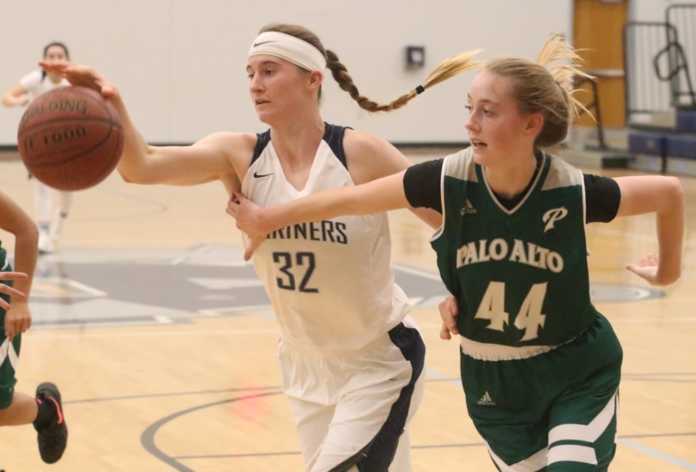 These moments don’t come along too often.

“This could be a pretty special season,” said Mariners senior guard Hannah Hocom. “I think all of us are excited for what we could become.”

With 10 players back, including four starters, from last year’s regional quarterfinalist team, Aptos knows this could be the year the program does something it has not since the 1982-83 season: play for a California Interscholastic Federation Northern California championship.

“We have the potential to go as far as we want to, as long as we stay strong and keep looking at the next game one at a time,” said Aptos junior point guard Gabby Giuffre. “We want to put up another one of those,” she said pointing up to the NorCal banner in the rafters of the school’s gym, “but we have a long way to go until that time comes.”

Aptos, ranked 35th in the state by maxpreps.com as of Thursday afternoon, isn’t the only team around the area that is determined to accomplish some history this winter.

In Watsonville, Pajaro Valley has hopes of winning the program’s first-ever league title. The Grizzlies have never finished higher than fifth in their 13 seasons as a varsity program. Star senior guards Jayleen Solorzano and Michelle Ibarra want to change that, and the recent league restructuring has given them a chance to reach their goal.

Pajaro Valley joined 32 other schools in the Pacific Coast Athletic League — a five-tiered equity league made up of the past members of the Monterey Bay League and Mission Trail Athletic League. The Grizzlies will be in the fourth-toughest division, the Santa Lucia, this season.

“We can never get over confident,” Solorzano said. “We can’t go based upon the past. We have to work hard and play our hardest all the time. We’ll see. It’ll be fun.”

Ceiba College Prep, Monte Vista Christian, North Monterey County, St. Francis and Watsonville are also members of the PCAL. Aptos, meanwhile, remains in the single-tiered Santa Cruz Coast Athletic League, where it will try to win back-to-back league championships for the first time since the ‘80s.

Here is a look at the seven local girls basketball teams:

The Mariners might have their most talented group in program history, but first-year head coach Chris Grieves said the 2018-19 season will still be filled with several challenges.

Their toughest tests will most likely come before and after their defense of their SCCAL championship. Aptos front-loaded its schedule with games and tournaments against state and national powers. So far the Mariners held their own against some of the best, scoring wins over Woodside Priory, Marin Catholic and Palo Alto.

They play the Monarchs at Presentation on Saturday at 3 p.m.

“That’s just one game in the preseason, but it’s definitely one game where we’re going to give it our all,” Giuffre said.

The 5-foot-11 floor general kept busy after the conclusion of last year’s season, taking a visit to Oregon, attending camps at Gonzaga and Cal and earning an invite to try out for the women’s youth national team.