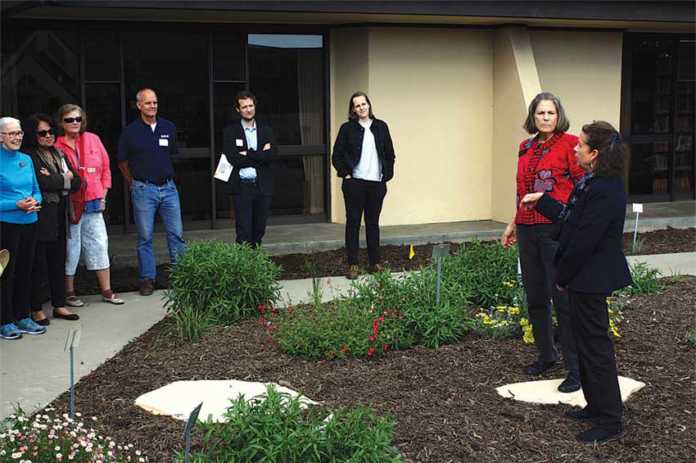 APTOS — The Friends of the Aptos Library opened a freshly designed landscape and garden to the public with a dedication ceremony April 13.

The combined efforts of the Soquel Creek Water District, Cabrillo College, Supervisor Zach Friend and others allowed the Friends to replace a barren patch of land that once made up the green lawn.

“It was awful,” said Debby Peronto of the Friends of the Aptos Library. “It was uneven, dead, no one could walk on it or do anything.”

The thought then was to replace it with a walk-through garden created with water-wise plants that make sense for the pollinators and environment. And while the inception of the idea began in mid-2015, it was not until 2016 that work could move forward.

“The goal of the library is to be a center for the community and attract different types of people,” Peronto said. “Gardens help people get interested and stay involved.”

“The amount of work and energy it took — it’s been amazing,” Cabrillo College student and landscape designer Cammie Brown said. “It’s going to be for life.”

Brown first was introduced to the project as an assignment for her sustainable horticulture class, and said she wanted to create a plant palette that will thrive in the area.

“People will be drawn out there and feel a sense of community,” she said of the garden. “A lawn is so unimaginative, this is more informed and such a beautiful look.”

Supervisor Zach Friend said the Aptos Library is the second busiest branch in the county and its makeover is just what the community needs. More renovations and improvements are being planned for under Measure S funding, but the garden was funded independently. Overall, he said it is the result of a community group taking ownership and taking charge.

“Now we have a low water, beautiful garden complete with an ocean view,” he said. “It is kicking off the rebirth of the branch.”

“It’s a small look at what we can do with the partnerships in our community,” Friend said. “It made sense for them, and the first time the community has had the chance to have input on how the remodel will look.”