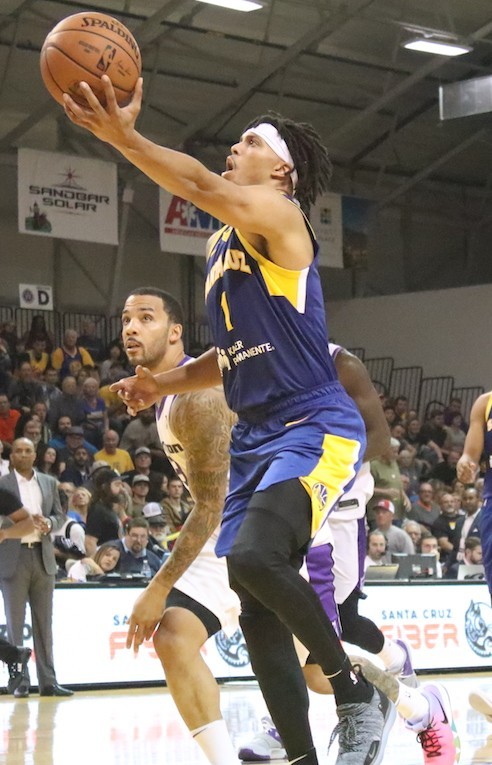 With that trio of Golden State Warriors watching courtside, the Santa Cruz Warriors put on a shooting clinic to cruise to a 123-104 victory over the Stockton Kings in their home opener Wednesday night at Kaiser Permanente Arena.

Their 79 first half points were just two off the franchise record.

“It was a great half for us,” said Santa Cruz second-year head coach Aaron Miles. “They came out and they played hard on the defensive end, and I thought they did a great job on the offensive end of sharing the ball. That’s how any coach wants their team to play.”

Lee — one of only four players returning from last year’s squad — led the Warriors with a team-high 28 points on 11-of-18 shooting. He also hit 4-of-5 shots from downtown and grabbed eight rebounds.

His back-to-back 3-pointers early in the second quarter gave the Warriors some breathing room, and guard Michael Gbinije followed with a pair of 3s of his own to break the game open.

The Kings made things interesting by cutting the lead to 15 midway through the final stanza, but the Warriors slammed the door shut with a final push over the last five minutes.

Guard Antonius Cleveland punctuated the win with a massive reverse slam, which sent Curry running from his seat and down the sideline in jubilation.

“He’s a freak athlete,” Lee said of Cleveland, who also had a high-flying, one-handed stuff near the end of the first half that brought the capacity crowd to its feet.

Cleveland joined Lee and four other Warriors in double figures with 12 points, seven rebounds and two of the team’s seven steals.

Guard Will Cherry and forward Kevin Young also forced a pair of turnovers.

The Kings threw away the ball 14 times. The Warriors turned those turnovers into 20 points, 11 of which came during their first-half blitz.

“We came out with a lot of energy and we fed off the crowd a lot,” said Warriors guard Darius Morris.

Morris scored 19 points off the bench.

Cherry chipped in 15 points, seven rebounds and five assists to go along with his two steals. Kendrick Nunn (11) and Gbinije (14) also finished in double figures.

The Warriors shot 53.4 percent from the field, and 57.1 percent from deep. All but one player scored, and Santa Cruz finished with 22 assists.

“Everybody contributed,” Miles said. “That’s the one thing we always talk about. When you’re in there, no matter how many minutes you play — even if you don’t play — be a value to the team and be great in whatever minutes you’re given. I think everyone did that.”

“They missed some shots that they would normally make,” Miles said. “That helps, but as long as we have that same mindset and approach, we’ll be great.”

Over the first two games of the season, Lee is averaging 27 points per game while shooting 66 percent from the field and beyond the arc.

Lee, one of Golden State’s two two-way players, said his scoring during the early seasons has been a product of the flow of the game.

“I’m out there shot hunting,” Lee said. “Whenever I see a player, or if someone goes under, or if someone chases, it’s just a matter of getting a shot up and hoping it goes in. If I don’t have a shot, I’m not going to force it. I have teammates. I’ll go out there and make the right play.”

Which is what has impressed Miles the most about Lee through training camp and during the first two games.

“He just plays the right way,” Miles said. “He doesn’t force anything. He lets the game come to him. When he’s open, he takes it. When he’s not, he moves it. And he cuts well off the ball…Right now, he’s knocking down everything, which is a great thing. But even if he wasn’t making everything, what he does, what he provides for us, is still beneficial for us.”

Santa Cruz rolled small for most of the night with 6-foot-7 Marcus Derrickson, Golden State’s other two-way player, playing at the five more than not.

Warriors’ 6-foot-11 big man Deyonta Davis got the start and made a handful of big plays in his 17 minutes of action, including a pair of blocks that led to Lee’s back-to-back 3s during the second quarter.

Miles said Davis could continue to see his role expand as the season continues.