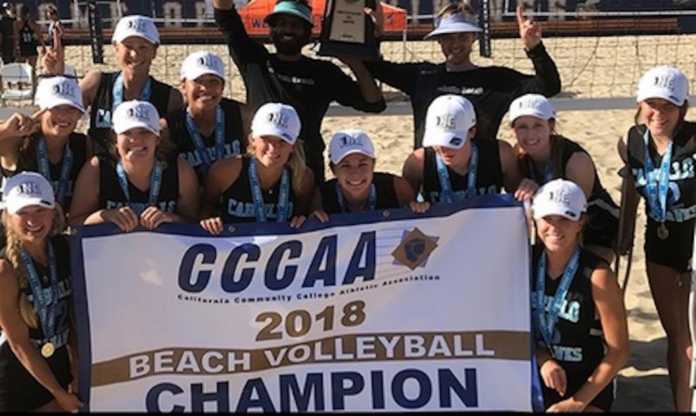 The Seahawks knocked off the defending California Community College Athletic Association champion MiraCosta College, 3-0, on May 10 at West Valley College to become the first team from Northern California to win the state beach volleyball championship.

“I think we trusted each other, we worked well as a team, communicated really well and just played hard,” Cabrillo head coach Lucas Bol said to CCCAAsports.org.

The last two matches, featuring No. 2 Mari Molina and Alex Bol and No. 5 Linda Fiso and Julie Samuelson, were halted.

“I’m really proud of the team,” coach Bol said. “We put in hard work for months, stuck together, and fought and battled and won a championship. I’m super proud of them.”

Cabrillo, the undefeated Coast Conference champion, turned away a pair of Southern California teams in pool play earlier in the day. The Seahawks took down Moorpark College, 4-1, and edged Long Beach City College, 3-2.

In the pairs state championship tournament on Friday and Saturday, Molina and Bol were forced to bow out in the first round, allowing teammates Hall and Wilson to advance to the quarterfinals.

Hall and Wilson fell in the quarterfinal round to the eventual state champion duo of Megan Ramseyer and Taira Ka’awaloa of Irvine Valley College.