Brothers save girl from drowning

By all accounts, Bryce Watson and his brother Rhys are typical kids. Both are students at Del Mar Elementary School in Santa Cruz and are active in several different sports.

Now, they can add another item onto their short resumes: lifesavers. The boys recently rescued a 4-year-old girl from drowning.

That happened on March 24, while they were attending a birthday party for a friend of their sister at Santa Maria Beach, which lies at the end of 21st Avenue in Santa Cruz.

Uninterested in the goings-on at the party, they opted instead to wander around the nearby lagoon where several people were clambering over rocks and swimming.

“We wanted to see how cold the lagoon is, and see if we could find any animals,” said Bryce, 10.

They found a handful of crabs and spent some time swimming before they saw the girl.

“When we got to the end of the lagoon, we saw a figure in the water,” Bryce said.

Alarmed, they got closer.

“We thought it was a human, and then Rhys said, ‘Bryce, I think she’s drowned,’” Bryce said.

The boys thought at first the girl was merely playing.

“But you could see the water was above her chin. So then we were like ‘yeah, she’s probably drowning,’” Bryce said.

“I swam in and picked her up, and then I walked back to the shore and I gave her to her dad,” he said. “She just started coughing up a bunch of water.”

The girl was expected to make a full recovery, Bryce said.

Attempts to reach the girl’s family were unsuccessful.

Bryce said he was apprehensive at first, a feeling that quickly passed.

“It felt a little scary,” he said. “I didn’t want to go in. I was scared a crab might grab my foot. But I calmed down during the process. We were pretty happy, we didn’t want the girl to drown.”

Rhys, 7, said he was not scared during the rescue, but bragged that he and his brother found several crabs later that day.

Their mother, Nicole Watson, said she didn’t know what was happening until she heard a commotion near the water.

“I looked over and saw Bryce carrying what looked to me like a lifeless girl out of the water,” she said. “It was a crazy feeling to see a small child in an adult way.”

Watson said that her son was “very calm” during the rescue.

“I was so super proud and just amazed,” she said. “I don’t have that kind of calmness when something happens.” 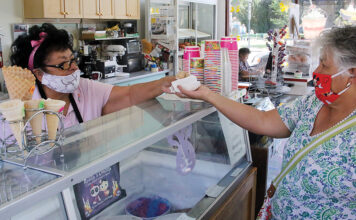