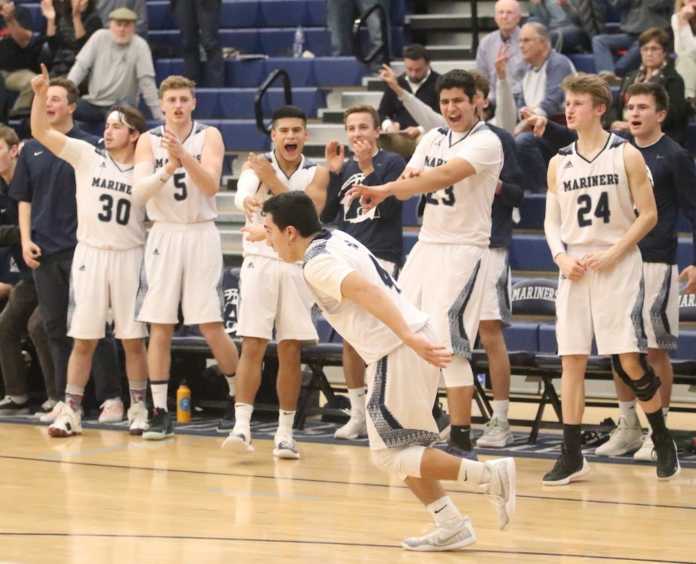 In the eyes of the Aptos Mariners, their loss to the Monterey Toreadores on Dec. 13 might as well have happened a lifetime ago…on another planet…and in a different universe.

“We were such a different team back then,” said Aptos senior point guard Max Pepperdine. “We’re a lot more prepared. They might think that they’re going to be playing the same team, but we’ve come so far.”

They’ll get a chance to prove it on Saturday.

Tipoff is scheduled for 4 p.m.

Monterey (21-4), which outlasted No. 4 Hillsdale, 63-60, to advance, will be playing in its third straight CCS D-III championship game. The ‘Dores and coach Greg Daniels finished runner-up to Archbishop Riordan last season, but won the year prior against Saratoga.

Monterey averages 67.7 points per game, and is one of only two teams this season to score 70 on Aptos. The ‘Dores poured in 76 points in their 31-point rout of the Mariners, and the Carmel Padres went for 70. Both of those games happened in early December when Aptos was still working in three of its key rotation players that helped the school’s football team win a section championship.

“I watched the film the other day. We weren’t moving very well, and we weren’t defending very well,” said Aptos senior wing Hunter Matys. “Our defense was atrocious last time, and I think we’re a better team now. I think we have a great chance of winning it all.”

If they play defense like they did on Thursday night, they will.

Aptos put the clamps on its Santa Cruz County mate, No. 3 Soquel, in a 54-44 win to advance to Saturday’s final.

The Knights (16-11) had all of 11 points in the early moments of the third quarter before they started to crack the Mariners’ airtight man-to-man defense.

Soquel kept it close for the majority of the second half, but Aptos pulled away late with a trio of clutch fourth-quarter 3-pointers from Pepperdine, senior wing Logan Feldbrugge and sophomore guard JoJoe Moreno.

Also helping their cause: having only four turnovers on the night.

“The second half, knowing that this could be the last 16 minutes, potentially, we’d be able to play, we came out hard,” Pepperdine said. “We wanted to win that game so much.”

Senior center Anthony Sanchez made the most of his 6-foot frame by pulling down a team-high five rebounds. He also dished two assists and scored four points.

Thursday was the fourth meeting between Aptos and Soquel. The Mariners swept the two-game, regular-season series to finish second in the Santa Cruz Coast Athletic League, and scored their third victory over the Knights in the semifinals of the league tournament en route to a share of the SCCAL title — Aptos beat Santa Cruz in the tournament final for its first league crown since the 2014-15 season.

Along with the bragging rights over its neighbor — the schools are only 10 minutes away from each other — and the chance at a CCS title, Aptos also clinched a spot in the upcoming California Interscholastic Federation NorCal playoffs, which will start on Feb. 26.

Talk of the next tournament will have to wait. There are more pressing matters at hand, Pepperdine said.

“We’re not even thinking about NorCal,” Pepperdine said. “We’re so focused on CCS. This has been our goal all season. We want a ring. We’re not overlooking this game at all.”

In other boys’ CCS basketball action:

• Nueva 65, St. Francis 54 – The Sharks’ season came to an end in the semifinal round of the CCS D-V playoffs against the Mavericks.

No. 3 Nueva improved to 21-4, and will play Eastside College Prep at Palo Alto on Saturday at 10 a.m. for the D-V title.

E.J. Kelly’s 3-pointer cut the lead to six late in the fourth quarter, but Nueva closed the game on an 8-3 run to advance.