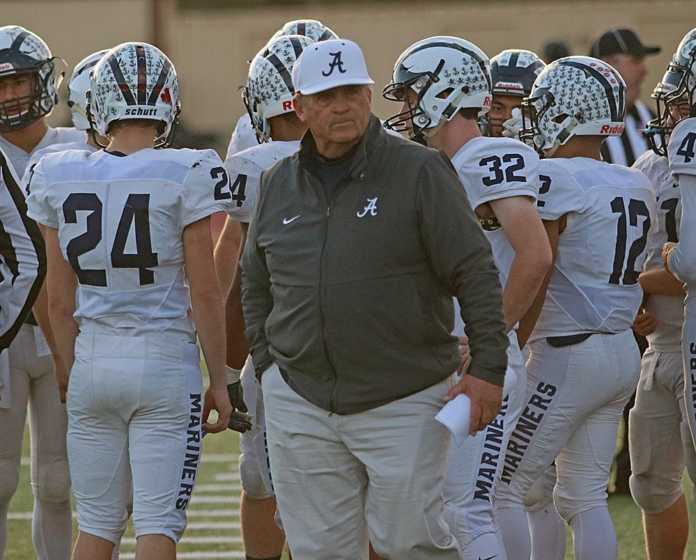 Key word in that sentence: try.

Blankenship, now a nine-time section champion and 285-game winner, will probably be fine-tuning the Mariners’ depth chart for the 2019 season while his family unwraps presents on Christmas morning. And he’ll probably be watching game film of the incoming senior and junior classes as the ball drops in Times Square to ring in the new year.

“I look forward to January to see what the 2019 team will do,” Blankenship said after Dec. 8’s loss to McClymonds in the CIF NorCal 4-A title game.

That’s not to say that this year’s group of seniors won’t stick with the 65-year-old coach. Quite the opposite. This year’s senior class — the catalyst of the best offense in program history — left him rejuvenated, and more excited than ever to get back to work.

Next season will be his 10th at Aptos, and 35th as a head coach — he’s coached football for more than 40 years overall, earning multiple awards over the decades, including Cal-Hi Sports Coach of the Year and the NFL High School Coach of the Year in 1998 and 2000, respectively. When he took the job at Aptos in early 2010, Blankenship told reporters he’d like to coach another six to 10 years.

He has no plans on calling it a career after next season.

“If I had a team like this every year, I’d be coaching a long time because these guys were fun to coach — they really were,” Blankenship said. “When you feel like you still have an impact on the kids, keep coaching. When you feel like they’re not listening anymore, you’re past your time. Right now, they seem like they’re still listening. I don’t put a date on it. When I wake up in the morning and I feel like I don’t want to come in, that’ll be my last day.”

Technically, that could be tomorrow — or the next day, or the day after that, and so on and so forth — but that doesn’t seem likely.

Blankenship feels like he still has unfinished business. Though Aptos has been able to go toe-to-toe with Palma, Salinas and San Benito, it has yet to win a league championship since being thrown into the same league as the tri-county’s big three — it finished runner-up in 2017 and tied for third this fall. And he’s only 15 wins away from breaking coach Bill Garrison’s wins record at Aptos (97) and reaching 300 wins — both of those marks might mean about as much to Blankenship as the fact that he has an Urban Dictionary entry: https://bit.ly/2SJhLU5.

Getting those 15 wins, however, will be no easy task without the services of one of the best groups of athletes the program has ever had. Senior running back Marcos Reyes, who holds at least 14 program records, played his last down for Aptos last week, and so, too, did 11 other starters, including quarterback Hunter Matys, offensive linemen Josh Sousa-Jimenez and Hayden Mennie, defensive linemen Anthony Cardenas Ramos and Kalvin Nguyen, receivers Shane Modena, Eli Galster and Angel Aparicio and defensive backs Silvano Lopez and Bubba Gallardo.

Off the top of his head after Saturday’s loss, Blankenship was able to list off all of his returning starters, the players in line to step into starting roles and some possible additions from the junior varsity team that went undefeated and posted five shutouts. Junior fullback/defensive lineman Josh Powell, who will enter next season with the third-most rushing yards in program history (1,864), all-league first team linebacker Dre Gomez, sophomore tackles Levi Slay and Adam Candelario and running backs Juziah Rivero, Vaughen Holland, Christian Mendoza and Andrew Manning are now in charge.

How they’ll do, Blankenship said, is up to them.

“Every year is a little bit different,” Blankenship said. “If the kids who come back feel entitled, we won’t do very well…The seniors next year, they’re going to write their thing. This group of seniors, they wrote a pretty good ending to their story even though we came up short.”

Editor’s Note: Tony’s Thoughts is a reoccurring column from Sports Editor Tony Nunez that dives into the local sports world with an emphasis in football in the fall. Contact Nunez at [email protected] or 761-7335.