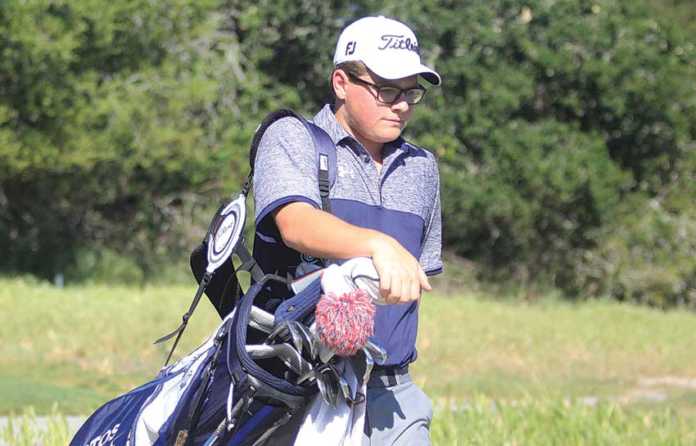 Aptos High head golf coach Jamie Townsend wasn’t able to follow the every move of his star senior golfer Max Meltzer at May 16’s Central Coast Section Championships — the longtime golf coach was serving as a marshal for the trio behind Meltzer’s group, which was the first to tee off at 8 a.m. But every now and then Townsend would peak over to see if Meltzer’s body language had changed.

“He never had a bad look on his face like he had just hit a horrible shot,” Townsend said. “He looked relaxed. He looked focused. I’d give him a thumbs up and he’d flash it right back at me. I said, ‘alright, this is going to be a good day.’”

It was better than good. It was championship material.

Meltzer edged Bellarmine’s Austin Murphy in a one-hole playoff to win the 2017 CCS Individual Championship at the Laguna Seca Golf Ranch in Monterey.

Meltzer, who is the first from the county to win the CCS title since fellow Mariner Nick Ragsac accomplished the feat in 2007, fired a 4-under par 67 to tie Murphy for first. He won the playoff with a par on the 1st hole, which was a par-4 hole.

Murphy bogeyed the hole after misfiring on his second putt a handful of feet away from the cup.

“It was quick — the way he wanted it to go,” Townsend said. “That was big for Max. He’s had other playoffs that haven’t gone his way. Times where he did everything right and sunk a birdie but some kid comes back and beats him with an eagle from 150 yards out. It’s been ridiculous but I’m happy he got this one. He was ecstatic.”

The victory was not only a crowing achievement but it also meant Meltzer’s final season at Aptos continued for at least one more week. The future San Jose State Spartan advanced to the California Interscholastic Federation NorCal Championships, which were scheduled for May 22 at the Sierra View Country Club in Roseville.

Murphy and the rest of the Bellarmine Bells will join him after taking third as a team with a score of 376. Archbishop Mitty (371) edged Bellarmine and second-place Harker (375) by a handful of strokes for its first-ever team title.

The top nine individual finishers at the NorCal Championships who are not members of the top three teams will advance to the CIF State Championship, which took place at Poppy Hills Golf Course in Pebble Beach on May 31.

Townsend said it is not out of the realm of possibility for Meltzer to finish in the top nine or, better yet, win the whole thing like Aptos great Eddie Olson did in 2004.

“[Meltzer] was so consistent and he was fresh,” said Townsend, who explained that Meltzer pulled out of several tournaments and stayed with his father in a hotel room in Monterey overnight to mentally prepare for Tuesday’s championships after a handful of hectic weeks at school.

“There was prom. There was schoolwork. He was just gassed. He was drained. He was doing all the things high school kids do. He was being a high school senior. But from the start of the morning you could see that his focus was back on golf.”

Meltzer was playing in his third CCS Championship. He finished tied for 33rd last season at Rancho Canada Golf Course in the Carmel Valley.

He was the lone local golfer to advance to May 16’s CCS Championships after carding a 2-over par 73 to finish tied for eighth at last week’s regional round.

Aptos, the two-time SCCAL champion, made it as a team to last week’s regional but finished 11th.