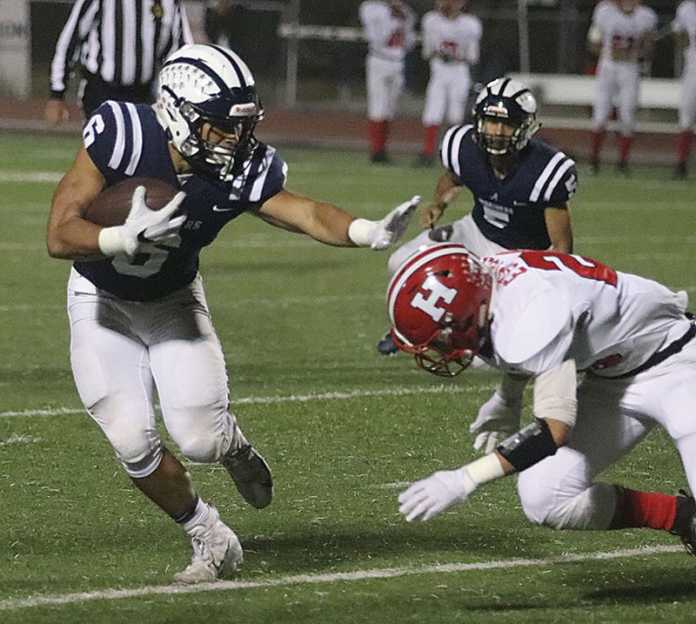 In 20 years, Aptos record-setting running back Marcos Reyes wants people to remember three things about him: (1) he was a nice guy, (2) he was a leader and (3) he treated his guys well.

He’s also helped the Mariners get off to their first 8-0 start since 1998, and put them in position to win the inaugural Pacific Coast Athletic League Gabilan division title.

Reyes and Co. will try to inch closer to the league championship tonight in a hotly-anticipated matchup against Palma (7-1, 4-1).

If you ask Reyes what is more important to him, the records or a league title, it’s not up for debate.

“Records can be broken,” Reyes said. “A league title is forever.”

That’s not to say his records aren’t something he’s proud of. It’s more a representation of what Reyes values about the game.

Reyes started playing football when he was 6, and primarily played on the offensive line as a guard because of his bulk. He never touched the ball in Pop Warner, and he wasn’t considered one of the team’s best players — he still considers himself “just another guy.” He was simply a cog in the machine, and that, more than anything else, was what fueled his love for the game.

“I just like the team environment, the competition, being with the guys, working hard, putting in the time,” said Reyes, who also plays linebacker. “There’s nothing like it.”

But Reyes is far removed from being a pudgy lineman.

Today, he’s a 5-foot-8, 190-pound bruiser with deceptive speed who hardly ever goes down on first contact. Reyes said his running style is all his own, although he does try to emulate some moves the pros pull off on Sundays. He’s tried to recreate Kareem Hunt’s burst in between tackles, LeSean McCoy’s elusiveness in the open field and Le’Veon Bell’s vision behind the line — just to name a few traits.

“[Lynch’s] determination to get through holes, and keep his feet running, that’s what Marcos does really well,” Matys said. “It’s amazing to watch.”

So amazing that his teammates spend a little extra time watching his runs during film sessions. Senior center Hayden Mennie had to hit rewind 10 or 15 times when watching one of Reyes’ runs from last week’s 54-7 win over Christopher in which he carried a handful of defenders for extra yardage.

“I don’t know how many guys hit him,” Mennie said, shaking his head. “I watched it so many times, and I counted over 20 yards after five guys hit him. He just doesn’t give up.”

Reyes might have a running style in common with Lynch, but that’s where the similarities end. He doesn’t turn interviews into sideshows, he can’t run a 4.46 40-yard dash — he says he might be the sixth fastest guy on the team — and his teammates don’t call him “Beast Mode.”

In fact, his teammates haven’t come up with a nickname for him despite his record-breaking performances.

What do they call him?

How does “Just Marcos” feel about that?

“It doesn’t matter to me,” Reyes said. “Me and a couple of the other guys call each other ‘boss,’ but it’s a mutual thing. He’s boss. I’m boss. They’re boss. It works.”

Maybe the only nickname that has stuck to Reyes over the last two years has been “No. 6,” his jersey number that every defense calls out before the play to make sure they know where he is. Team after team has tried to scheme against him, but not many have had much success.

Last year Reyes rushed for 1,274 yards and 16 touchdowns in nine games, and this fall he’s racked up more than 700 yards rushing and scored 18 touchdowns. He also rushed for 395 yards and six touchdowns as a sophomore.

There’s little doubt that Reyes improved since the end of last season, but the weapons around him have also stepped it up a notch, making it even tougher for opposing coaches to scheme against him.

Junior fullback Josh Powell has gotten faster and stronger since rushing for 980 yards as a sophomore. Senior wingback Bubba Gallardo and junior wingback Vaughen Holland can take it the distance on any given sweep. And Matys has brought some balance to coach Randy Blankenship’s Wing-T offense with senior receiver Shane Modena and junior tight end Casey Bailey.

Reyes still has at least three more games — two in the regular season and, at minimum, one in the Central Coast Section playoffs — to pile on more yards and points to his marks, and he will probably see more action over the next three weeks than he’s seen all season.

He could very well explode for huge performances, or he could be a very valuable decoy that allows his teammates to make plays. The second option would rob him of chances to bolster his records, or catch the eye of a college scout — he has hopes of playing football in college.

He doesn’t care about that.

Reyes wishes he could say the records and the notoriety mean “everything” to him, but he’d be lying to himself if he did.

“It’s just an accomplishment of what I did in high school,” Reyes said. “I gave it my best shot. I put in the work in the weight room, and I spent my time here. I’ll be up in the hall of fame in the weight room. That’s something I’ll like — to be remembered.”

For more than just the records, he hopes.