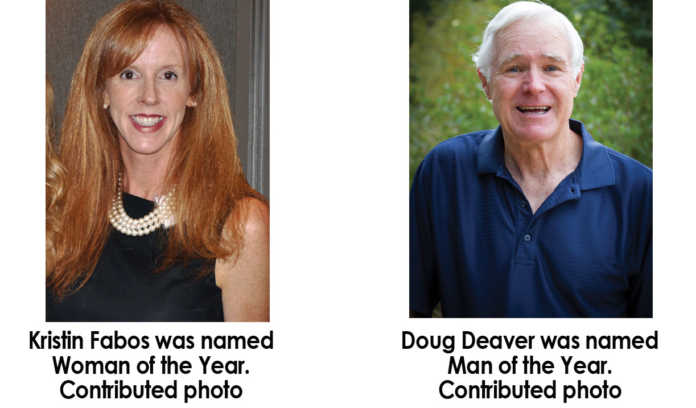 Doug Deaver will be honored as Man of the Year, and Kristin Fabos as Woman of the Year. The Business of the Year went to Rio Sands Hotel, while the Organization of the Year is the Advocates for the Forest of Nisene Marks.

Rounding out the list is LEO’s Haven with the Outstanding Achievement award, and the County of Santa Cruz Department of Public Works as Community Heroes.

Man of the Year: Doug Deaver

Doug Deaver retired from Cabrillo College where he served as Director of Facilities Planning, Purchasing, Contracts & Risk Management. Prior to working at Cabrillo, Deaver was Director of General Services for Santa Cruz City Schools. He has a BS and MS from Purdue University in Industrial Management with a minor in Computer Science.

He is also a Business Advisor for the Small Business Development Center (SBDC), and has assisted business owners at Rancho Del Mar Center during the redevelopment. He is a board member of Aptos SIRS and a member of the Santa Cruz County Sheriff Advisory Committee and the Sheriff Volunteer program where he assists with presentations to local second grade students regarding child safety.

Woman of the Year: Kristin Fabos

Kristin Fabos is the Director of Marketing & Communications at Cabrillo College, where she has led the marketing, communications, public relations, community relations and government relations efforts since 2010. She has been instrumental in giving the community information on Cabrillo College news and events, including the 4th Grade Experience, graduations, annual reports, community forums, college responses to state and federal legislation, as well as theater and arts events.

As a member of the Cabrillo College Symphonic Chorus, she was honored by participating in a lifetime event, the opportunity to perform with the Chorus at Carnegie Hall this past June.

Fabos has 25 years of management and marketing/public relations experience spanning both corporate and nonprofit sectors. Prior to Cabrillo, Fabos was the Executive Director of SeniorNet, a leading technology educator of older adults, and prior to SeniorNet, she had a 13-year career in corporate, high technology marketing communications.

This past April, she, her husband Rye and a team of 15 others, traveled to Lesotho, South Africa with Habitat for Humanity and built a house for a grandmother who was raising her four grandchildren. In 2009, Fabos volunteered outside of Nairobi, Kenya with the nonprofit group, the “Kenya Orphanage Project.”

In 2013, 2014 and 2015, Fabos co-chaired the American Cancer Society’s Santa Cruz Garden of Hope Fashion Show fundraiser, and she currently serves on the committee. She is on the Board of Directors of Leadership Santa Cruz County and is an active member of the Watsonville Rotary.

The Rio Sands Hotel was originally developed in 1962 as a 42-unit residential condominium complex. In 1969, three additional parcels were acquired and the property was increased to 52 units and began operating as a hotel, with a “Bed and Breakfast Permit.” The hotel went through a major remodel in 2011.

Based on the season, as many as 25 people are employed by the hotel. Today the property is co-owned by Lou Bartfield and Steven Allen and is operated by Allen Property Group, with Maggie Moya as General Manager.

For many decades, the Rio Sands has provided its meeting room facilities, free of charge, to various community and civic groups. The property has hosted thousands of guests ranging from community forums, supervisorial updates, emergency planning and polling place events. Most recently the hotel regularly provides space for groups such as the Aptos Little League, Capitola/Aptos Rotary Youth Leadership Awards (RYLA) and fundraising presentations for the Aptos History Museum. In 2015, the hotel was presented with several awards by the Rio Del Mar Improvement Association for the hotel’s long-term commitment to providing facilities for the group’s many meetings.

Organization of the Year: Advocates for the Forest of Nisene Marks

The Advocates for the Forest of Nisene Marks State Park is a nonprofit all-volunteer organization that supports the maintenance and improvement of the Park. The Advocates are celebrating their 25th anniversary this year.

For the past 25 years, the organization has helped maintain and repair the park’s trails, bridges and even the “out-buildings.” Once a month. volunteers head out onto the trails to brush-back, remove obstructions, maintain drainage, and grade the trail surfaces as necessary.

Additionally, the Advocates act as a “liaison” to State Parks advocating for the wants and needs of the park users. In that role, they have been supportive in the development of the General Plan, installation of Margaret’s bridge, the creation of the ADA trail to the Wagoneer Overlook, benches at Santa Rosalia, Interpretive Panels and Dust Abatement on the Fire Road.

The Advocates raise money to fund these projects and many others. By the end of this year alone, all three bridges will have been replaced on the Bridge Creek trail along with the bridge at the bottom of the West Ridge trail.

Outstanding Achievement of the Year: LEO’s Haven
In December 2013, Bob, Tricia, Lauren, Evelyn and Oliver Potts visited an inclusive playground.  For the first time, Oliver, who uses a wheelchair, could play together with his sisters. Inclusive playgrounds are specially designed so a child with a disability can play side-by-side with their friends instead of being sidelined by sand, wood chips or stairs. These playgrounds feature custom play equipment that delight and challenge all children.
Inspired to bring inclusive play to Santa Cruz County, the Potts family of Watsonville founded the all-volunteer Santa Cruz Playground Project, and in June 2015 formed a public-private partnership with the county to make LEO’s Haven at Chanticleer Park in Live Oak a reality. “LEO” is an acronym from the names of the Potts siblings and “Haven” refers to the community’s desire to develop a safe and welcoming play space where all children can belong.

The nonprofit, Shane’s Inspiration, designed the playground based upon input from local children. In June 2016 the capital campaign began, and businesses, foundations, service organizations, and other community members are stepping forward.

Community Heroes of the Year: County of Santa Cruz Department of Public Works

Over the past decade, Santa Cruz County Public Works has seen a significant drop in transportation funding necessary to effectively maintain county streets and roads.

In response, Public Works tightened its belt and tried to provide the best possible service with its limited funding. However, there has been a decline in the roadway system, so over the past several years Public Works looked for opportunities to increase funding at the local level. In particular, Public Works sought out every potential grant available, and were successful in securing funding for multiple safety improvement and bridge replacement projects on county roadways.

Public Works was also involved in advocacy efforts with multiple jurisdictions in supporting Senate Bill 1. The Director of Public Works, John Presleigh, in his role as the 2017 President of the County Engineers Association of California, worked directly with the California State Association of Counties to encourage county Public Works Directors throughout the state to educate their respective board members and state elected representatives on the merits of SB 1, which was passed in early 2017.

A portion of the new funding sources generated by Measure D and SB 1 will be particularly important as a local match in recovering from the 2016/2017 winter storm events. The county experienced three state and federal declared disaster events over this past winter. These events resulted in approximately 300 storm damage sites with estimated damages of $128 million across the county. At this time, Public Works has completed the documentation on all the storm damaged sites through FEMA and FHWA and has begun repairing the county roads and other infrastructure.