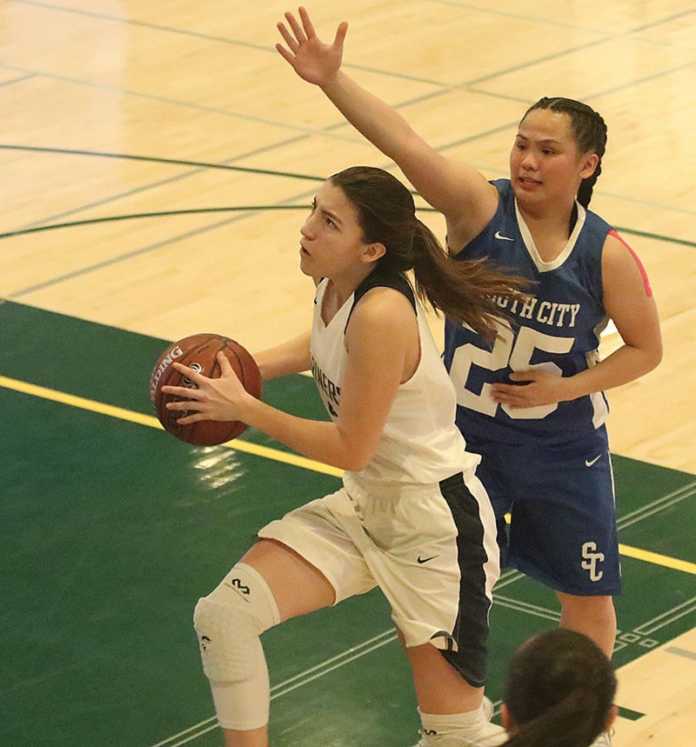 PALO ALTO — The celebration was not championship material, but the play on the court was — without a doubt.

Top-seeded Aptos won its second Central Coast Section Division III crown in the last three years, and the Mariners made it look easy with a 58-37 redemption win over No. 2 South San Francisco on Feb. 23 at Palo Alto High.

“This means everything to us,” said junior forward Natalia Ackerman. “We’ve worked so hard this season, and I don’t even know how to put it in words.”

Their actions didn’t fully express the overwhelming joy they felt after exacting sweet revenge over S.S.F. (20-9) either. When the final horn went off, a few players lifted their arms and a couple let out a shout. The jumping joyous hugs of two years ago following the Mariners’ (23-6) first section title since 1983 were nowhere to be found.

“I think we were all so tired,” Ackerman said through a laugh. “That was the lamest celebration ever.”

Ackerman earned a long rest after yet another standout postseason performance. The 6-foot-1 human pogo stick was all over the floor for the Mariners, finishing with a game-high 28 points, 22 rebounds, five blocks and four steals. The Cal Poly-San Luis Obispo commit averaged 29.3 points and 17 rebounds over Aptos’s three-game CCS postseason run, which included a 40-point, 18-rebound flurry against No. 9 Capuchino in the quarterfinals.

“There’s not many high school basketball players that can beat her with her pure athleticism, and over the last few weeks she’s started to play so smart,” said Aptos first-year coach Chris Grieves. “When you combine that with her athleticism, she’s an unstoppable player at this level.”

The game was tied 12-all after the first quarter, but Stefanini’s back-to-back makes from 3-point range served as the exclamation point of the Mariners’ 16-3 run to open the second quarter. Aptos went into the half up nine, and pulled away in the third quarter with another quick shower of buckets from Giuffre and Ackerman, and a running layup from senior guard Hannah Hocom.

“I wasn’t expecting [those shots],” Stefanini said. “I knew to win we had to go out and run at a fast pace. I was open, and I just shot it.”

Stefanini said she played all of three minutes in last year’s CCS final loss against S.S.F., but that did not lessen the sting that accompanied the Mariners’ letdown.

“Everybody was sad and super down, some people were even crying,” Stefanini said. “It’s amazing that we won again. It’s great to come back and take [the trophy] again.”

Salise was a thorn in the Mariners’ side during last year’s CCS final at Piedmont Hills High, but Aptos managed to take away her lanes to the bucket by switching to 2-3 zone as it pulled away.

Her 3-pointer during the early moments of the third quarter was one of only two field goal makes for the Warriors in the frame.

Aptos won the third quarter 12-5, and Ackerman’s 3-point play off an offensive rebound on the opening possession of the fourth was the proverbial dagger.

“I was just going for it,” said Ackerman, who had 11 offensive boards. “I didn’t even realize that I was scoring like that. I felt like everything was coming within our offense. We weren’t forcing shots.”