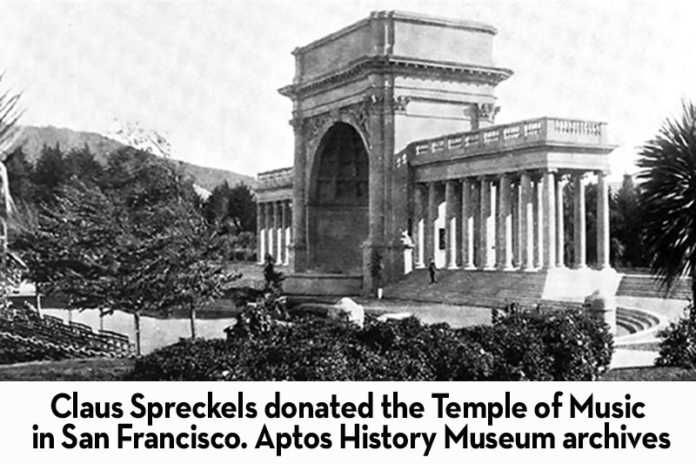 A most amazing man, and rich, too: Claus Spreckels | by John Hibble

Who owns this place? The native people did not pretend to own the land, they lived on it and considered it sacred. The first owners of Aptos were the King and Queen of Spain. The Catholic Church and the Army administered their holdings. After Mexico threw off Spanish rule, the land was granted to citizens who had helped develop the region. Rafael Castro was granted the 6,600-acre Aptos Rancho. Claus Spreckels was the third owner of the majority of Aptos and this is his story, (Part 1).

Claus Spreckels was one of the most industrious, successful, and powerful people involved in the history of Aptos. A truly amazing individual. His impact on our community was profound. However, Aptos was only a small chapter in the story of Spreckels’ impact on our state and country.

Claus was born in 1828 in Lamstedt, in the independent German kingdom of Hanover. At the age of 18, he boarded a ship for America for the opportunities it afforded as well as to avoid military service in the European wars.

Upon reaching the East Coast, Claus found employment in a grocery store and was so adept that he bought out the owners upon their retirement and established lines of credit so that he could build, what turned out to be, a very successful business. Claus married Anna Mangels in New York. They moved to San Francisco in 1856. Claus Spreckels’ brother Peter, and Anna’s brother Claus Mangels, married twin sisters. The three couples founded the Albany Brewery, the first large-scale producer of beer in San Francisco.

Their next venture was the Bay Sugar Refining Company in 1863 which they sold in 1865 for a considerable profit. Spreckels returned to Germany to learn everything about refining sugar. In 1867, he opened the California Sugar Refinery. Harnessing centrifugal force, he invented new machines to speed up the refining process from three weeks to one day. Up to that time, sugar was sold in blocks or loaves which required the user to crush them for loose sugar. Spreckels introduced granulated sugar and sugar cubes, and at such low prices that most of his competitors closed. This made him a millionaire and earned him the title of “Sugar King.”

In order to control the sugar market, Spreckels acquired 40,000 acres in Hawaii on Maui and built a canal to bring water from Hana to plant and irrigate sugarcane. He also built railroads and refineries. He reached a point where he purchased the entire sugar output of the Islands for his San Francisco factory. Unhappiness with his methods ultimately led the Hawaiian growers to establish the California and Hawaii (C&H) sugar refinery in Crockett, California.

While in the Islands, Spreckels financed the Hawaiian King, David Kalakaua, acted as the national bank, and virtually controlled the Kingdom.  He also financed William Matson, who was the captain of Spreckels’ private yacht. Matson founded the famous Matson Lines steamship company which developed trade and tourism to the Hawaiian Islands. Spreckels also financed his son, John D. Spreckels, who started the Oceanic Steamship Company which carried freight and mail between San Francisco and the south seas.

As competition in the sugar market increased, Spreckels decided to produce sugar in California from sugar beets. He created a competition among cities for the new factory. Eventually, Watsonville won the competition by agreeing to give the land to Spreckels and to plant at least 2,000 acres of sugar beets each year. Spreckels built a railroad to Moss Landing so that the product could be transferred to his family’s ships. As production increased and beets were planted farther into the Salinas Valley, Spreckels moved production near Salinas and built the largest sugar refinery in the world.

When Claus Spreckels felt that he was being taken advantage of, he would go into competition with his adversary and usually force the adversary to submit and then to purchase Spreckels’ assets at twice the cost of his investment. At one point, the sugar trust on the East Coast tried to control the cost of sugar so Spreckels moved to Philadelphia and built a refinery to undercut their prices. Ultimately, they had to buy out Spreckels and he doubled his money. Southern Pacific Railroad was charging excessive freight rates in the Central Valley, so Spreckels built a competing railroad from Richmond to Bakersfield which he eventually sold to the Santa Fe Railroad.

Claus Spreckels held substantial amounts of real estate in San Francisco. One of his developments was the ornate and elegant “Claus Spreckels Building” on Market Street. At 310 feet tall, it was the first modern skyscraper in San Francisco. The San Francisco Gas & Electric Light Co. had two stations near the building with smoke stacks that funneled smoke into the new office building. Spreckels requested a solution to the problem. Although attempts were made to solve the problem, the president of the utility was rude to Mr. Spreckels so Spreckels organized the Independent Light & Power Company. The competition eventually led to a consolidation of the power companies and a profit of over $1,000,000 to Claus Spreckels. The consolidation eventually lead to a merger with Pacific Gas and Electric.

It should be noted that Claus Spreckels was civic-minded and made many donations including to St. Marks Church, Children’s Hospital, the University of California, and the Dewey Monument in Union Square. He donated the bandstand in Golden Gate Park between the deYoung Museum and the California Academy of Sciences, known as the “Temple of Music” with seats for 20,000 people.

In 1905, Spreckels’ estate was valued at approximately $50 million which made him one of the 10 richest Americans of his time. Today, that would equate to more than $15 billion. In 1998, he was ranked 40th on the list of wealthiest U.S. Americans of all time.

Next month our story will chronicle Claus Spreckels’ time in Aptos and why one of our streets is named Spreckels Drive. Please support and thank the advertisers who make these stories possible and consider becoming a member of the museum.

By John Hibble, of the Aptos History Museum One...
Guest Columnist

By Zach Friend, Santa Cruz County Supervisor If you’ve been...