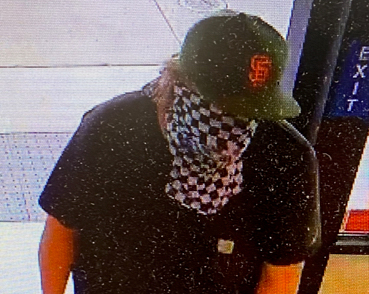 Brian Lee Johnson, 34, has been charged with using stolen credit cards, receiving stolen property, theft and forgery. He was also on probation for a crime committed in another county.

Johnson is being held in Santa Cruz County Jail without bail, and will likely not be released before his arraignment, Sheriff Jim Hart said.

The case started when someone allegedly entered the truck of a Cal Fire firefighter and stole a wallet.

The Sheriff’s office on Sunday released images from video surveillance footage of a man wearing a black-and-white cloth over his face, as well as a green San Francisco Giants hat as he visited the Safeway store on 41st Avenue in Soquel.

When investigators searched Johnson’s residence, they found clothing that was seen in the video, along with merchandise they believe was purchased with the stolen cards, Hart said.

Johnson admitted he used the cards, and wrote an apology to the victim, Hart said.

“Clearly he did not realize when he used this firefighters credit cards what he was getting himself into,” Hart said.

Hart made the announcement Thursday afternoon during an impromptu press conference held in Scotts Valley.

According to Hart, Johnson purchased several gift cards with the stolen cards, with one purchase totaling $1,400. Investigators on Thursday were planning to speak with another man connected with the theft, Hart said.

Especially galling, Hart said, is the fact that the firefighter came from out of the area to fight the fires in Santa Cruz County.

“This happened to a man that came in to help us,” he said. “It’s just not right, and I am really going to advocate to have this guy held accountable.

“That’s not who we are here in Santa Cruz County. It’s not a good representation of who we are.”

The arrest came after a tip from a caller who said they knew Johnson, and said they recognized the clothing shown in the video, Hart said.

On Aug. 21, law enforcement officials arrested five suspected looters after they were found with several stolen items in two vehicles.

Tony Nuñez
Managing Editor Tony Nuñez is a longtime member of the Watsonville community who served as Sports Editor for five years before entering his current role in 2019. A Watsonville High, Cabrillo College and San Jose State University alumnus, he covers the city, business, housing, entertainment and more.

After a significant portion of the Bonny Doon community...
COVID-19