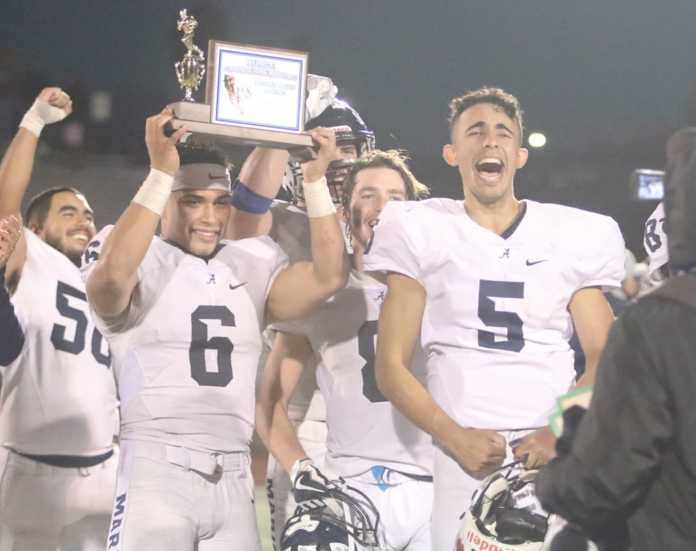 A pass breakup from Bubba Gallardo on a 2-point conversion.

A perfect toss from Marcos Reyes on a halfback pass.

A key sack by Vaughen Holland in the final minute.

The Aptos football team was on the ropes throughout the fourth quarter of Saturday’s Central Coast Section Open Division III championship game. But whenever the Mariners needed a play — big or small — someone answered.

“The heart our kids showed tonight was incredible,” said Aptos head coach Randy Blankenship. “I saw the look in their eyes, and numerous times they were ready to give up and they didn’t. Somebody would make a play and we’d get some more juice in our tank. It was something else.”

It was what separated No. 5 Aptos from No. 2 Sacred Heart Prep in a back-and-forth barnburner between two relentless teams that seemed ready to throw haymakers until one could no longer stand.

Undersized, overlooked and struggling heading into the playoffs on a two-game losing streak that robbed them of a league championship, the Mariners (11-2) completed their impressive run to the program’s fourth CCS title of the decade with a wild 35-34 comeback win over the Gators (11-2) at Westmont High.

“This means everything,” said Aptos senior quarterback Hunter Matys. “Knowing that we came into the season wanting a league championship and a CCS championship. We didn’t get the league championship, so we knew we had to keep fighting and hopefully bring a CCS title to our school again.”

It’s the program’s fifth section crown overall, and first since Aptos completed its CCS title three-peat with a win over Hillsdale in the D-IV final in 2015. The Mariners join Live Oak and Los Gatos as the only public schools in the CCS to win four championships in one decade. The former won four in the 1980s, and the latter won half-a-dozen during the 2000s.

“These guys set history,”  said Blankenship, still smiling from ear to ear from the win.

In more ways than one.

Aptos is also the first team from Santa Cruz County to earn a spot in a California Interscholastic Federation NorCal bowl game. The Mariners will host Oakland Section power McClymonds (10-2), a state champion each of the last two seasons, on Dec. 8 at 6 p.m. in Division 4-A.

“It’s going to be fun no matter what,” said Reyes, a senior. “It’s great to play another game with the boys. I love my guys.”

Aptos, the third-place finisher in the Pacific Coast Athletic League Gabilan division, looked like it was going to finish its season bannerless after S.H.P. sophomore quarterback Raymond Price III took off for a go-ahead, 48-yard touchdown run with 2:05 left to play. But the Mariners marched 81 yards in less than a minute for the eventual game-winning score thanks to some trickery.

Reyes found Modena for a 37-yard completion on a halfback pass to jump start the offense, and two plays later the former charged into the end zone on a 10-yard touchdown run.

S.H.P. stopped Reyes on the ensuing 2-point conversion to give itself a chance at a possible game-winning field goal with 57 seconds left to play. Price and Co. nearly delivered, as his 35-yard pass to Dante Cacchione brought the Gators close, but a costly holding penalty moved them back 18 yards and Holland came up with a clutch sack to all but put the game out of reach.

Matys picked off Price two plays later to seal it, and ran off the field pointing to the hundreds of Aptos supporters, who for the fourth straight game made sure the Mariners felt right at home on the road and partied with the victors on the field following the win.

“There was mistakes made by everybody, but we executed when we needed to,” Reyes said.

S.H.P., runner-up in the Peninsula Athletic League Bay division, nearly played mistake-free football for most of the night, and even got the lucky bounce when things went wrong — their first touchdown of the day was a 7-yard touchdown pass from junior kicker Ronan Donnelly on a bobbled hold — but the Gators ran out of time to answer Aptos’s late score, which was the game’s fifth lead change.

S.H.P. was making its first CCS final appearance since 2015, a season in which it won its fourth straight title and fifth of the decade.

“It’s a real heartbreaker for our program,” Price said. “Everybody counted us out this year. Nobody thought we’d make it here, so the fact that we got here is really amazing.”

The game was knotted at 15-all at the half, and 22-all heading into the final stanza.

But Aptos exorcized its fourth-quarter demons by doing what it was unable to do during the regular season: close out a tight game.

“I was confident,” Matys said. “Our O-line is amazing. What they can do, produce the holes they do for me, Marcos, Powell and all our running backs. It’s insane what they do. They work their butts off in practice. They don’t take any days off, and it paid off tonight.”

Fresh off a dominant performance in a 49-6 win over top-seeded Palma a week prior, the Aptos defense stuffed the running lanes and limited S.H.P.’s running backs for the majority of the night.

Junior running back Tevita Moimoi finished with 97 yards rushing on 24 carries, while senior fullback John Willard (26 yards) and Bardns (23 yards) both finished with less than 30 yards on the night.

Price, considered the “X-factor” by Blankenship in the week leading up to the game, sparked most of the Gators’ offensive success with his wheels, as he escaped more than a handful of sacks throughout the night. He finished with 119 yards rushing on 15 carries, and also completed 13-of-21 passes with a touchdown and the interception.

“I thought if we could stop him, I don’t think the game would have been as close,” Blankenship said. “But players make plays, and he made plays, and our players came back in the end and made plays.”

Reyes, the program’s leader in rushing yards and points, led all rushers with 214 yards and two touchdowns on 25 carries, Matys added 81 yards and a 28-yard touchdown run on 10 rushes and Powell plowed ahead for 40 yards and a pair of scores on eight totes.

Aptos finished with 365 yards rushing and 445 yards overall, breaking the program’s season record for yards a week after it broke the record for points in a season.

The Mariners will have at least another week to add on to their impressive record-breaking year full of firsts.

“No matter what happens, everything from here on out is icing on the cake,” Blankenship said. “I’ll probably take until Wednesday or Thursday to rally. They’ll bounce back faster than I will. That was an emotional hard-fought game.”